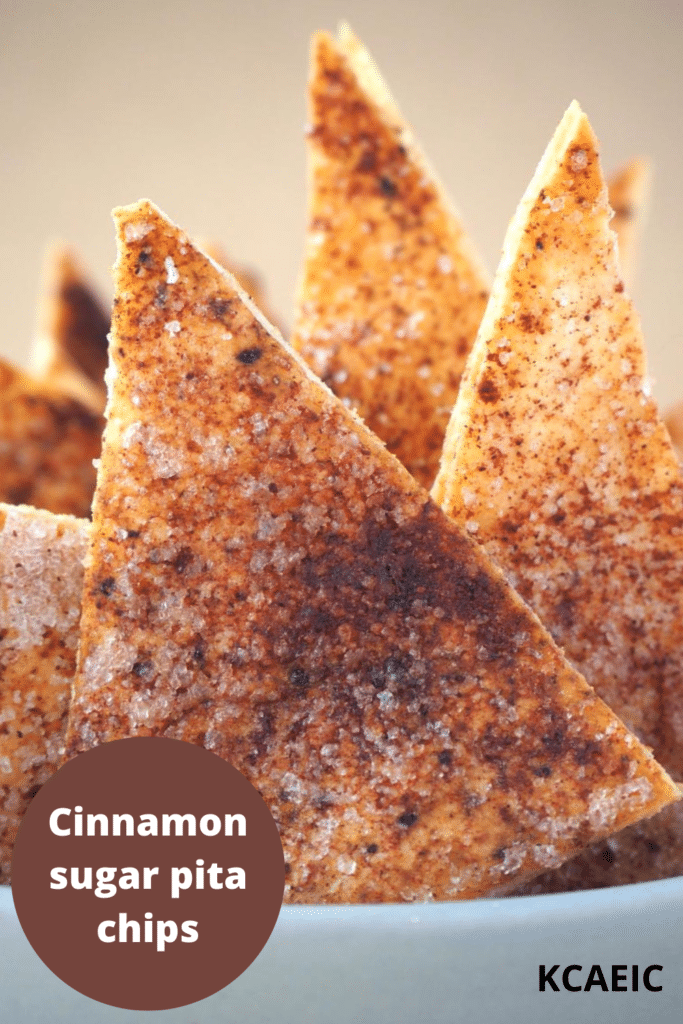 These cinnamon sugar pita chips have just four ingredients, are quick and easy to make and are completely moorish. I challenge you to try and stop at just one!

What can I serve these with?

You don't have to serve these with anything, you can just eat them by the hand full on their own. However I also tried them with a bowl of cinnamon honey yogurt which took them to the next level. You could eat them with your favorite sweet dips, perhaps some mascarpone cheese drizzled with a little honey or some berry sauce.

Can I make other flavours?

Cinnamon is a well-known spice made from the inner bark of several species from the genus Cinnamomum. Cinnamon can actually come from two different trees, Cinnamomum verum, sometimes called true cinnamon and Cinnamomum cassia, also called cassia. Most commercially grown cinnamon comes from cassia. Fun fact you can even grow your own cinnamon tree at home, although it does take at least two years before you can start harvesting the aromatic inner bark.

Sugar: I used castor sugar here but you could try other sugars such as raw. I don't recommend using brown sugar as it won't spread evenly across the pita.

Pita bread: I use large wholemeal pitas in this recipe to make them a bit more healthy. You could use white if you prefer and small pita if that's what you can get. You could try experimenting with other flatbreads but you would need to see how they crisp up in the oven.

Butter: use your favorite butter or nondairy spread. You could even try using a mild-tasting oil or refined coconut oil.

Cut the pitta up into chip-sized pieces. A pizza cutter is perfect for this, or you can use a large sharp knife. Spread the pieces evenly across baking trays, ensuring they do not overlap.

Bake in the oven for about ten minutes until crispy. Oven temperatures can vary so I recommend checking on the chips after five minutes and baking more as needed.

To serve the pita chips

You can eat these straight from the oven, try not to burn your fingers on the tray! Pop them into a bowl and munch away, or try serving them with a bowl of cinnamon honey yogurt or your favorite sweet dip. Delicious!

To store the pita chips

If you have any leftover pita chips that don't get gobbled up straight away you can store them in an air-tight container lined with baking paper for up to a week, after which they may start to lose their crunch. But I doubt they will last that long! 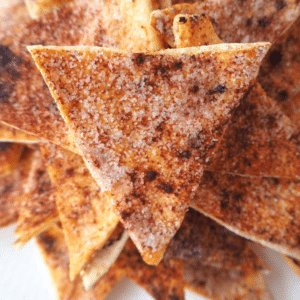 I use wholemeal pita in this recipe to make them a bit more healthy but you could use white if you prefer.  You could experiment with other flat breads but remember to watch them in the oven and vary the baking times accordingly.   I use castor sugar in this recipe but you could experiment with other types of sugar, it should work with pretty much anything except icing sugar.   Its really easy to scale this recipe up or down.  For each large pita allow the following

Keywords: crisps, dessert chips
Tried this recipe?Let us know how it was!
168 shares