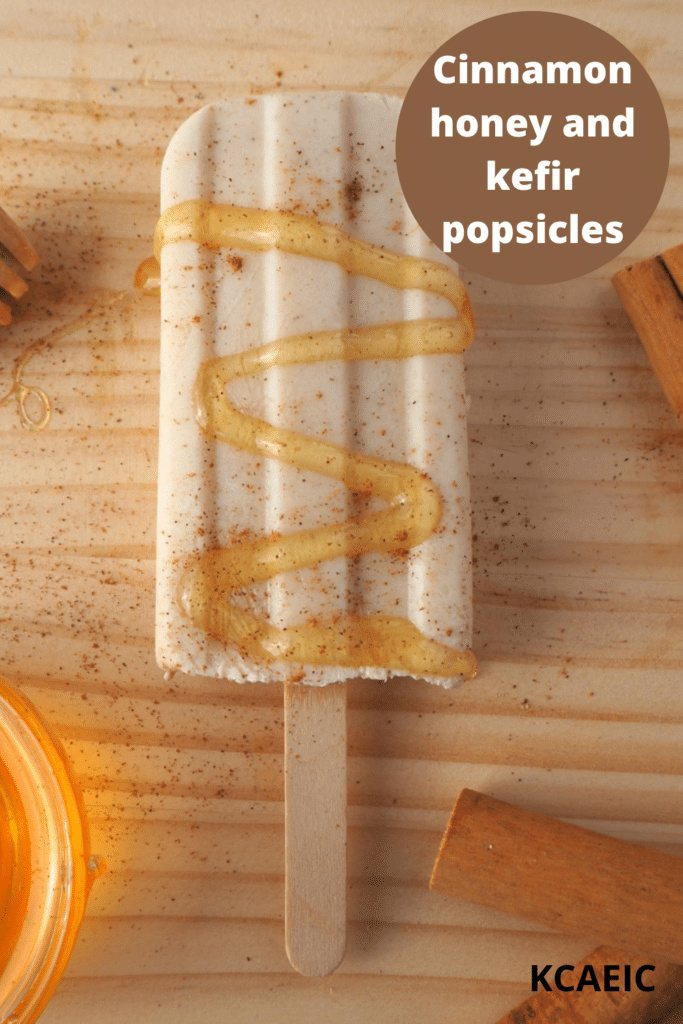 These cinnamon, honey and kefir popsicles are full of probiotic goodness with warming cinnamon, natural honey and no refined sugar.

Kefir or kephir is a type of fermented probiotic drink. You can get water kefir or milk kefir as I used in this recipe. Kefir is fermented using kefir grains which are a type of mesophilic symbiotic culture. Milk kefir is similar to thin-drinking yogurt and can be substituted in this recipe.

Cinnamon is a well-known spice made from the inner bark of several species from the genus Cinnamomum. Cinnamon can actually come from two different trees, Cinnamomum verum, sometimes called true cinnamon and Cinnamomum cassia, also called cassia. Most commercially grown cinnamon comes from cassia. Fun fact you can even grow your own cinnamon tree at home, although it does take at least two years before you can start harvesting the aromatic inner bark.

Honey as we all know is produced by bees from nectar gathered from flowers. The flavor and color of the honey produced depend on the flowers the nectar is collected from. For example clover produces a light, mild-tasting honey, whereas nectar collected from leatherwood, a type of gum tree in Australia, produces a darker, aromatic honey with a distinctive flavor.

Looking for more fabulous desserts with honey? Why not try making my decadent Toblerone cheesecake or fresh and juicy orange popsicles. Delicious!

Cinnamon - for this recipe I use regular ground cinnamon or cassia, available from the supermarket. True cinnamon is much harder to get hold of but you could use that to if you wish.

Honey - for this recipe I used some raw honey I got from Holly's Backyard Bee's. Where possible I try to get locally-produced honey. Try your local farmers market. You can use whatever flavor honey you like, just make sure its one you'd be happy to eat straight and you'll be able to taste it in the popsicles.

Kefir - I use milk kefir in this recipe, available from some supermarkets and health food stores. If you can't get kefir you can substitute with drinking yogurt or with regular or greek yogurt mixed with some milk at a pinch to get a runny consistency.

🔪 How to make the cinnamon, honey and kefir popsicles

Shake the kefir bottle well and add to a jug or bowl. Warn the honey up a bit to get a good runny consistency so it mixes in easily. This is easiest to do by heating it in the microwave for a few seconds. Add the honey and cinnamon to the kefir and blitz with an immersion blender for a few seconds until fully combined and all the honey is mixed in.

Hot tip: make sure there is sufficient room in your freezer for the popsicle moulds Before adding the popsicle mix, or there will be tears!

Pour into popsicle molds and add sticks. Put into freezer and freeze overnight until set.

Gently remove from popsicle molds and enjoy! Great with an extra drizzle of honey and a sprinkle of cinnamon or as they are. Delicious!

These popsicles can be kept in an airtight container lined with grease-proof or baking paper in the freezer for up to two weeks, after which the flavor may start to dull. 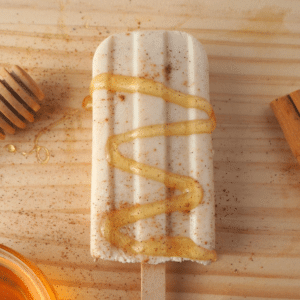 Kefir is a probiotic drink, similar to drinking yogurt.  Its available from some supermarkets and health food stores.   If you can't not get kefir you can substitute with drinking yogurt or regular yogurt mixed with a little milk to get a runny consistency.

Keywords: icy pole, probiotic
Tried this recipe?Let us know how it was!