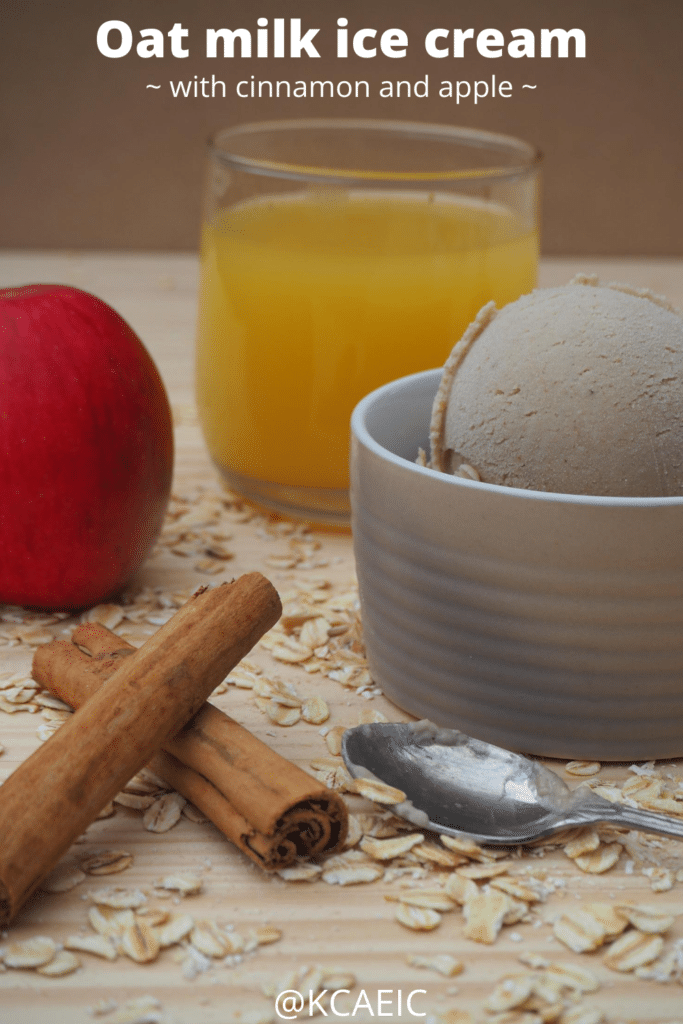 This cinnamon, apple and oat milk ice cream is so creamy and delicious, its just like your favorite bowl of porridge but better! Ice cream for breakfast anyone?

The flavors in this ice cream are inspired by my apple crisp recipe and a warming bowl of creamy, delicious porridge. I've made several dairy free ice creams but challenged myself to make an oat milk ice cream. Could I make it as creamy? Would is be delicious? In a word Yes! I am delighted with how well this recipe turned out, to the point is has become my new favourite vegan ice cream. I hope you enjoy it as much as I do!

Cinnamon: I use regular ground cinnamon in this recipe.

Apples: I use Jazz apples in this recipe. I love the sweet, crisp crunchiness of them. I prefer using red apples rather than green which can be a little sour but use what you can get. You can always add a little more sugar if you need to.

Oats: rolled oats are best for this recipe. They roast up beautifully. You could try using steel cut or quick oats, however I haven't tested the recipe with these varieties and it may affect the texture of your ice cream. Quick oats in particular may make the ice cream to thick.

Oat milk: available from supermarkets and health food stores. You could also make your own using a recipe such as this one by This Healthy Kitchen.

Cashews: I use un roasted cashews here so as not to compete with the flavour of the oats. Cashews give much needed fats and creaminess to this recipe. I have not tried this recipe with other nuts and you may not get the same creaminess, but let me know if you try it.

Castor sugar: regular white sugar is fine. You could substitute with the same amount of brown sugar but it may compete with the oat flavor. I don't recommend using powdered sugar. I have not made this recipe with sugar substitutes.

Brown sugar: I use this in the oat topping which is optional and in the apples. You can substitute with regular white sugar if you wish.

Optional: a shot of 40% neutral alcohol such as vodka. This helps lower the freezing point of the ice cream and keeps it scoopable. You can try substituting with ½ tablespoon of glucose syrup or leave it out altogether. Your ice cream will set firmer but it will still taste delicious!

How to make cinnamon, apple and oat ice cream

Preheat the oven to 350°F (180°C) Spread oats onto a tray and bake for five to ten minutes until golden brown, watching carefully to make sure they don't burn.

Add toasted oats and oat milk to a saucepan. Bring to the boil then simmer for 20 minutes, stirring frequently to make sure it doesn't stick to the bottom of the pan. Allow to cool then strain using a metal strainer. Do not use a cheesecloth as pictured, the mix will be to thick! (I learned this the hard way). You will need to work at the oats to get the milk through the strainer with a spatular to the back of a small plastic cup works well. The milk that strains through with be a lovely thick, creamy texture.

Peel, core and chop apples. Add to a frying pan with nondairy margarine and panfry on a medium heat until soft and starting to caramelize. Add sugar and ground cloves and heat for a few more minutes until sugar is dissolved. Allow to cool. Set aside about ¼ of the apple mix to top the ice cream with. Blend remaining apple mix in a food processor or the chopping bowl of an immersion blender until fairly smooth. You may need to scrap down the sides. Do not add any water to make blending easier, you will introduce to much water into the ice cream.

Measure the coconut oil. If the coconut oil is solid melt it in the microwave for a few seconds until runny. Add the cashews to a food processor or the chopping bowl of an immersion blender. Blend until fine bread crumb consistency. Add the coconut oil and blend for several minutes until smooth and no longer gritty. You may need to stop and carefully scrape down the sides to ensure even blending.

Churn the ice cream. It will be the consistency of soft serve when done. Transfer to a chilled container and freeze until firm or overnight.

To make the crunchy oat topping

Preheat the oven to 350F (180C). Melt nondairy margarine in the microwave for a few seconds until runny. Add melted butter and brown sugar to oats for topping and mix well. Spread out on a baking tray and bake for approximately ten minutes until golden brown and starting to crisp up. Turn off the oven and allow to cool completely for maximum crunch. Transfer to an air tight container to store until needed.

Scoop from the container into a bowl, top with saved caramelized apple and crunchy oat topping. So good you could eat it for breakfast!

This ice cream will keep in an airtight container in the freezer for up to a month, after which it will still taste delicious, but may become a little icy over time. 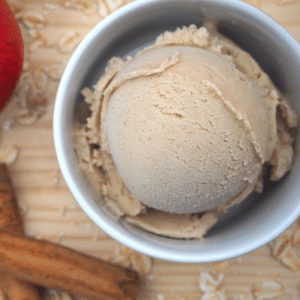 For the ice cream

To make the oat topping

Keywords: dairy free, plant based, vegan
Tried this recipe?Let us know how it was!
248 shares