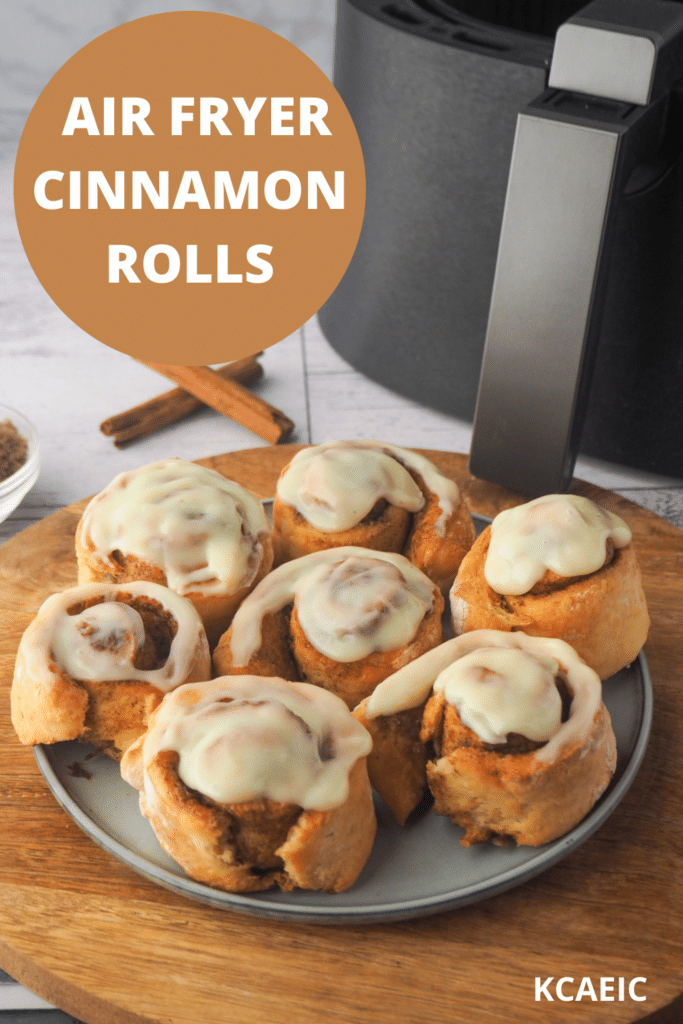 These air fryer cinnamon rolls are ridiculously quick and easy. With a tangy cream cheese glaze you can be munching on these delicious rolls in just fifteen minutes!

Cinnamon rolls are synonyms with Fall, cozy mornings and holiday breakfasts. There's nothing quite like the fabulous smell of freshly baked rolls wafting through the house, tempting the kids out of bed and putting a smile on everyone's face.

The only problem? They take so darn long to make. Like, hours of planning in advance, kneading and general faffing. I mean arguably it's worth it. But sometimes you forget. Or you don't have time. Or you decide on a whim Need cinnamon rolls right now and you can't wait any longer!

These air fryer cinnamon rolls are the answer. What they lack in tradition they make up for in sheer quick and easiness. The dough has just two ingredients. That's right two. And comes together in a matter of minutes. Whip up a little cinnamon sugar butter while the air fryer heats up, throw on some cream cheese glaze and you can be munching on these fabulous scrolls in as little as fifteen minutes. That's way less time than it would take you to go to the store. And you probably already have the ingredients you need in your pantry right now.

So what are you waiting for?

White Self raising flour: white self-raising flour is best for this recipe. You could also use all-purpose flour mixed with baking powder if you prefer to make your own. The ratio is usually two teaspoons of baking powder to one cup of plain flour, but check the instructions on your baking powder.

For a slightly healthier version of these rolls you can replace half a cup of white self-raising flour with wholemeal self-raising flour. I do this all the time and my kids and family don't even notice the difference and still gobble them up!

Greek yogurt: adds fats and thickens up the simple dough in this recipe. You can't replace this with natural yogurt as it won't be thick enough. For a dairy-free version you could try coconut yogurt, but I haven't tried it with this variant.

Brown sugar: also known as light or dark brown sugar. I like to use brown sugar as I find it gives a better caramelly taste, but you could use what if you prefer.

Butter: for the cinnamon sugar.

Powdered sugar: also called icing sugar, it's used in the cream cheese frosting for these scrolls.

Put your air fryer onto 340°F (170°C). This is optional but I find it gets better results. Unlike an oven I find my air fryer only takes about five minutes to preheat.

Add the flour and Greek yogurt to a bowl and mix well. You will need to switch to using your hands at some point and roll the dough around the bowl until all the flour is mixed in. You may need to lightly kneed the flour into the dough in the bowl.

Lightly dust the bench with flour. Using a rolling pin start to roll out the dough into a rectangle. Pick up the dough, dust the bench with a little more flour, flip the dough over and continue rolling out. This will help stop the dough from sticking to the bench. Roll the dough into a rectangle approximately thirty cm by fifteen cm. Put the butter into a microwave-proof bowl and microwave it for ten to twenty seconds to soften it up a little bit. Mix in the cinnamon and brown sugar.

Spread the dough with cinnamon sugar butter. Roll the dough up from the long edge until you have a long log shape. Cut the log into about eight pieces. This is easiest to do by cutting in half, then each piece in half again and again. I recommend using a sharp knife dipped in flour to cut the scrolls and use a sawing action rather than pressing straight down. This will help keep the round shape and stop them from getting squashed. To be honest my kids have 'helped' me cut the rolls and they were a little wonky, but still tasted delicious.

Put the rolls scroll side up directly onto the air fryer basket, or into a greased cake tin.

Hot tip: I have made these putting the scrolls both directly onto the air fryer basket and into a cake tin first (check to make sure it safe to use the air fryer and fits in your air fryer). Cooking the rolls directly in in the basket gives more golden brown rolls, but some of the filling can leak out and end up in the bottom of the air fryer. The cake tin method is cleaner, but I find you can sometimes end up with a more doughy bottom. I personally prefer the rolls cooked directly onto the basket, but my husband couldn't tell the difference taste wise and prefers less washing up! Up to you which method you prefer 🙂

Cook in the air fryer at 340°F (170°C) for about ten until golden brown. I recommend checking after ten minutes and cooking for a bit longer if needed.

To make the cream cheese glaze add the cream cheese, lemon juice and vanilla to a bowl and beat together. Sift in the icing sugar and mix well. This recipe makes a fairly thick glaze that's heading towards being frosting. If you like it thinner you add a little milk to thin it out first.

Slather the scrolls with cream cheese glaze while warm or cooled and you're done, or leave them unglazed if you prefer.

To serve pop onto a plate and enjoy! Delicious warm straight from the air fryer with or without some fabulous cream cheese glaze drizzled over the top. Delicious!

These tasty cinnamon scrolls are so quick and easy to whip up and are best eaten on the day they are made, ideally while still warm. In the unlikely event you have any left they will keep in an airtight container on the bench for up to two days, but may start to go a little dry over time.

The cream cheese glaze however does freeze well. I recommend making a double batch of the glaze and popping it into a small airtight container in the freezer.  You can grab out a couple of tablespoons warm briefly in the microwave before drizzling over freshly air-fried rolls, making them even quicker and easier! 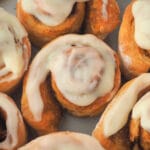 NB: The cream cheese glaze freezes well.  I recommend making a double batch and popping it into the freezer.  You can grab out a couple of tablespoons and warm briefly in the microwave before drizzling over freshly air-fried rolls, making them even quicker and easier!