Hokey Pokey or honeycomb ice cream is a New Zealand classic. A trip to New Zealand isn't complete without trying a scoop or two. Most Kiwis have nostalgic childhood memories of this flavor, my husband, who's from the North Island, included.

Hokey pokey candy, also known as cinder toffee or sponge candy, is a delicious treat that's made by simply heating sugar and golden syrup together and adding bicarb. The bicarb causes a reaction that makes the mix rapidly expand in volume. The mix is then quickly turned out and allowed to set into a sweet crunchy slab that's broken into pieces.

After the delicious honeycomb ice cream I had at a local ice cream shop last week, I decided to have a go at making a Hokey Pokey ice cream recipe myself.

This recipe combines a creamy vanilla bean ice cream base with a decadent honey caramel sauce and a crunchy fresh honeycomb candy. The three elements come together to make a rich, creamy honeycomb ice cream that my husband assures me is as good as, if not better than the original. Try it for yourself and let me know what your think!

First, make the vanilla bean custard ice cream base. Then make the honey caramel and finally the fresh honeycomb which has the shortest shelf life.

Put the water onto boil for your double boiler if using.

Separate egg yokes and add sugar in a medium heat-proof bowl. Blend together using a hand mixer or mixing bowl until eggs and sugar go pale and foamy.

Carefully pour the milk/cream/vanilla bean mix into the egg and sugar mix a bit at a time, stirring well between each addition.

Hot tip: place heat proof non slip surface under the bowl to help it stop moving, such as a damp tea towel.

Once combined pour all the mix into the top of a double boiler. Cook over low heat, string frequently, and watch carefully. If you cook the mix at too high heat or for too long you will scramble the eggs. Cook the custard until the mixture is thick and coats the back of a spoon or spatular.

Hot tip: if you don't have a double boiler you can use a regular saucepan, but you will need to watch the mix very carefully to avoid over heating and scrambling the eggs.

Once the mix is thick enough remove the top of the double boiler and put it on a stable surface, such as a colander to cool off for a few mins. Pour the mix into a container, cover, and refrigerate overnight.

This sauce is very easy to make and tastes amazing in this ice cream or anywhere else where you want a rich, sticky caramel sauce. I dare you to try and resist eating it straight from the jar with a spoon!

Add honey and brown sugar to a small saucepan. Where ever possible I try to get local honey. It supports local producers (and bees!), which means I know where it comes from and it tastes much better and is more complex than supermarket brought honey. This particular batch came from Holley's Backyard Bees when I did a beginner bee-keeping course recently. The brown sugar gives this a lovely deep tasting caramel but you could use raw or castor sugar if you prefer a lighter caramel.

Mix the honey and brown sugar on low heat until the sugar dissolves and the mix has gone a lovely rich amber color. Add the butter and stir until combined. Add the cream and stir stir stir. Stir over low heat until the sauce is thickened to your liking. I like my sauce nice and thick, so this took about 15 mins over very low heat with constant string to reduce the sauce.

Hot tip: to test how thick your sauce is add a teaspoon to a small freezer proof bowl or saucer and pop into the freezer for a min. The sauce will cool rapidly and you'll be able to see how tick the sauce will be once cooled.

Once the sauce is thick enough pour it into a clean container with a lid. The sauce will keep in the fridge for up to a week, but I doubt it will last that long!

Honeycomb is impressive but surprisingly easy to make. It's important to have your ingredients and equipment set up first because once you add the bicarbonate of soda you need to move Fast.

Line a baking tray or pan with parchment paper. Measure out your bicarbonate of soda and give in a stir to remove any lumps. Put both near the stove where you are making the honeycomb, with the tray on a heatproof surface.

Add your sugar and golden syrup to a LARGE pan and stir over low heat until sugar dissolves, about 5 - 10 mins. Turn heat up to medium heat and cook, stirring regularly until a beautiful deep golden color. In theory, you can use a candy thermometer and get it up to 151C. In practice when I tried to do this I burnt the sugar, so I think going by eye and color is fine.

When the sugar mix reaches the right temp, take it off the heat and quickly add and stir in the bicarbonate of soda. The mix will puff up quickly. Try to make sure the bicarb is mixed through quickly, then immediately pour it into the pre-lined baking tray.

Hot tip: Add any scrapings from the pot to the side, not in the middle or you will deflate your honeycomb. Leave until completety cool, about an hour or more.

Once cool carefully peel off the parchment paper. Flip over and use the back of a heavy knife to tap the honeycomb until it cracks through. Store in a lined airtight container until needed. The honeycomb with slowly go sticky as it reacts with the moisture in the air over a few days, but it will still taste great.

Hot tip: you can add pieces of honeycomb to the layers at this time. During recipe testing all the smaller lumps of honeycomb dissolved into the ice cream after only twelve hours. Only the larger pieces, about the size of a large marble survived. To preserve crunch and texture I reccomend adding honeycomb when serving.

To serve scoop out some ice cream, spoon over extra gooey honey caramel and sprinkle with pieces of crunchy honeycomb on top. Sit back and enjoy your delicious creation!

Why not try making: 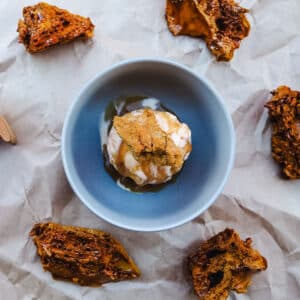 The honeycomb is best made the day of use as it will react with the moisture in the air and start to deflate and go sticky as soon as it's made.

Keywords: Hokey Pokey, honeycomb, Kiwi, New Zealand
Tried this recipe?Let us know how it was!
57 shares