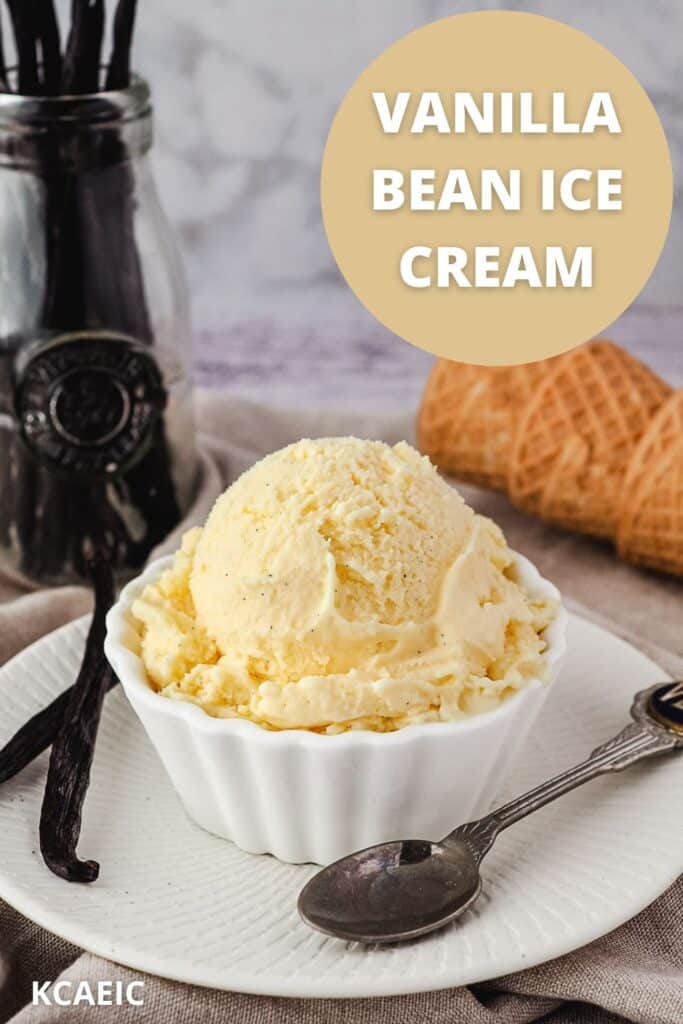 This French vanilla bean ice cream is made with a traditional egg custard for a classic, creamy ice cream that's rich and delicious.

This old-fashioned vanilla ice cream is a rich, luxurious ice cream made in the traditional French style with an egg custard or creme anglaise base. The combination of aromatic vanilla beans with the rich custard base gives a fabulous flavor that rivals that of any ice cream shop.

What's the difference between vanilla and french vanilla ice cream?

French vanilla ice cream refers to the method of making the ice cream with an egg custard base that's been flavored with vanilla.

So the difference between vanilla vs French vanilla ice cream referred to the different methods of making the ice cream. Either type can be flavored with a variety of vanilla, from whole vanilla beans to essence or flavoring.

What to serve with vanilla ice cream

This versatile flavor is delicious on its own but also pairs perfectly with just about anything! Some fabulous ideas include:

It depends. This homemade ice cream is gluten-free however store-bought ice cream can have unexpected ingredients added, so if this is an issue for you it's always best to check the ingredients on the label.

No vanilla bean ice cream does not contain caffeine.

Vanilla beans: are available for supermarkets and specialty baking stores.

Cream – in Australia I use thicken cream. The key thing is it needs to have a fat content of around 35% or you risk your ice cream being icy.

Milk – gotta be the full cream stuff, so around 3.5% fat. Anything less is going to make your ice cream icy.

White sugar: for both taste and scoop-ability. White sugar gives a clean taste to the ice cream or you could use castor sugar which will dissolve a little easier.

Egg yokes: use large eggs and separate out the whites. You can set aside the egg whites to make something else such as my amaretti cookies.

Glucose syrup – also called confectioner’s glucose. Its available from some supermarkets or specialty baking stores. A small amount of glucose syrup helps lower the freezer point of ice cream and improves the texture and scoopability of the ice cream. If you can’t get glucose syrup you can substitute with the same amount of light corn syrup or powdered dextrose, commonly available from brewing shops. Do not add to much or your ice cream will melt in a red hot minute!

🔪 How to make vanilla bean ice cream at home

See the full recipe card at the end of the post for ingredient amounts and instructions.

If using a double boiler put the water onto boil. The post should be quite full but not touching the bottom of the double boiler.

Separate eggs and put egg whites aside for another recipe, such as my amaretti cookies. Put the egg yokes into a bowl and beat them together with an electric hand mixer. The mix will be very yellow to start with, but will pale to almost white when beaten enough.

Temper the egg yokes by slowly adding the warmed milk and cream milk to the yokes a bit at a time, mixing well in between.

Once fully combined pour into the top of the double boiler. A double boiler is an option but it makes it much easier to cook custard ice cream bases. It evens out the temp and makes it less likely to curdle.

If you're not using a double boiler put the mix into a pot and have the heat on very low. You will need to watch it very carefully to prevent it from catching and curdling.

Simmer gently and stir stir stir 'until it coats the back of a spoon', stirring frequently and ensuring to scrape the bottom and sides.  Basically until it holds the line when you run your finger through it (don't burn your finger!).

Hot tip: as soon as the custard is cooked remove the top of the double boiler and place it in a colander. This will allow your mix to cool without overcooking it before you strain it.

Put a sieve over a heat-proof container and strain mix to remove any eggy bits. Put the vanilla pod back into the base, cover and chill for at least four hours, preferably overnight. This will help infuse more vanilla flavor into the base from the vanilla pod.

Put your ice cream storage container into the freezer to chill. If you are using a self-chilling churner turn it on ten mins before to chill.  Remove the vanilla pod and set aside to make something else, there will still be plenty of flavor left in it.

Churn the ice cream. It will be the consistency of soft-serve when done. Transfer to the chilled ice cream container, cover and freeze for at least four hours, or until firm.

To serve, remove from the freezer, scoop and enjoy! Fantastic on its own, in a decadent ice cream sundae or paired with your favorite dessert. Delicious!

To store the ice cream put it into an air-tight container in the freezer. It will have the best taste and texture if eaten within one week. It will keep significantly longer than this but may start to become icy over time.

*If you can't get vanilla beans you can substitute with 2 teaspoons of vanilla bean paste, essence or extract. *Glucose syrup is available from many supermarkets and specialty baking stores.  It greatly improves the texture and scoopability of the ice cream.  You can make the ice cream without it but the ice cream will set harder and you may need to put it in the fridge for five to fifteen minutes before serving to make it soft enough to scoop.