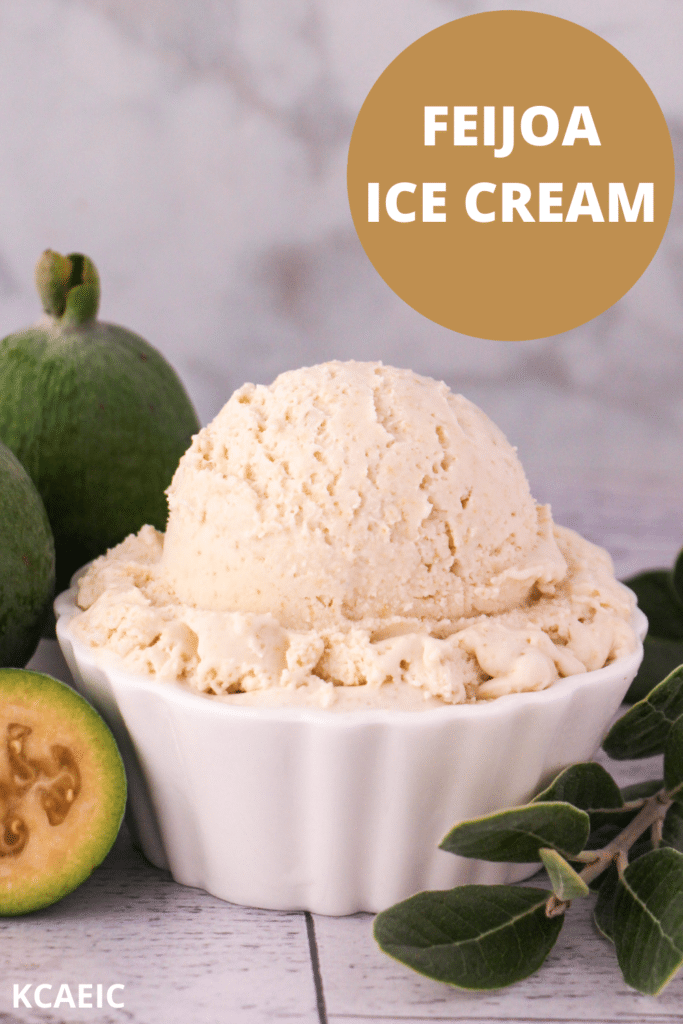 This feijoa ice cream is fresh, fruity and full of feijoa flavor. A great way to use a bountiful feijoa harvest and enjoy the fruit beyond feijoa season.

Feijoas or pineapple guavas or guavasteen, are a type of green oval-shaped fruit with a bright yellow interior. It tastes somewhat like a cross between a pineapple and an apple but it is also said to have hints of passion fruit and mint.

In my husband's home country of New Zealand they are a very popular ornamental tree and have been widely grown since the 1920s. Established trees can be very productive and give a bountiful harvest of fruit each season from mid-March to early June.

With such a glut of fruit that doesn't keep particularly well many people are looking for interesting recipes to help use up all that fruit. This feijoa ice cream uses approximately one kilo of fruit, or enough for two tightly packed cups of scooped feijoa flesh, plus one or two extra whole feijoas. Feijoas can vary widely in their size and sweetness, so the number of feijoas you will need to get this amount of pulp will vary.

In New Zealand during feijoa season of course they are plentiful and many people sell them cheap or have a neighbor with more fruit than they can use. In Australia or other parts of the world try asking around your local buy, sell swap groups. You may be able to find someone with a tree who's happy to trade for some fruit like I did or they occasionally have them at local supermarkets depending on where you are in the world.

Had enough ice cream but still have heaps of feijoas? Why not try making my feijoa crumble, feijoa cake or my husband's favorite, feijoa cheesecake 🙂

Feijoas: feijoas, also known and pineapple guava, are essential for the recipe. Fresh is best, but frozen will do in a pinch. You will need two cups of tightly packed, peeled feijoa flesh for this recipe, which was approximately one kilo of feijoas, plus one or two whole feijoas (optional).

Fresh lime: fresh lime is best for this recipe. The tang helps enhance the flavor of the feijoas. I don't recommend using bottled lime juice, it won't taste the same.

Thickened cream: I use thickened cream in Australia which as a fat content of about 34%. You could also use heavy cream or heavy whipping cream which is similar.

Granulated sugar: also known as white sugar. You could use castor sugar if you prefer. I don't recommend using other types of sugar, they will be hard to dissolve and will compete with the flavors in this ice cream.

Glucose syrup: also called confectioner’s glucose. You can get in from specialty baking shops, online and some supermarkets. A small amount of glucose syrup helps lower the freezer point of ice cream and improves the texture and scoop-ability of the ice cream. You can substitute with the same amount of light corn syrup or powdered dextrose. Measure carefully, preferably using a digital kitchen scale, and don't add too much or your ice cream will melt in a red hot minute!

How to make feijoa ice cream

Slice the feijoas and scoop out the flesh, keeping two who feijoas in reserve. Blitz the feijoa flesh and strain using a fine mesh.

Hot tip: slice the feijoas length ways to make it easier to scoop out the flesh!

Slice the end off the two additional whole feijoas. Chop into pieces and blitz whole. Strain and add to the rest of the feijoa pulp. This step is optional but it really adds to the feijoa flavor of the ice cream.

Put the strained feijoa pulp into a small pot on the stove. Bring to the boil then reduce to a simmer. Simmer for about twenty to thirty minutes, stirring frequently or until the pulp has reduced by 25% (so down to no more than 1 and three-quarters of a cup of pulp).

Add the sugar, cream and glucose syrup to the pot. Stir on low heat until well mixed and sugar and syrup is dissolved. Remove from heat and allow to cool. Transfer to a heat-proof jug. Juice the lime and add the lime juice to the ice cream mix and mix well.

Chill the ice cream mix in the fridge for at least four hours, preferably overnight. Put your storage container in the freezer to chill. If you are using a self-refrigerating ice cream churner turn it on about ten minutes before churning your ice cream, otherwise take your freezer bowl out of the freezer right before churning.

Churn the ice cream. It will be the consistency of soft serve when done. Transfer the ice cream to the pre-chilled container and freezer for about four hours, or until firm.

To serve remove from the freezer, scoop and enjoy! Fabulous on its own or with some fresh chopped feijoa flesh sprinkled over the top. Delicious!

This ice cream will store well in an air-tight container in the freezer for up to two weeks. After that it may start to become a little icy, but it will still taste delicious! 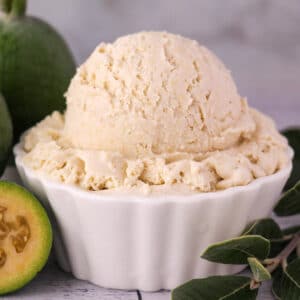 To make the ice cream without an ice cream churner

Keywords: feijoa, ice cream machine, pineapple guava
Tried this recipe?Let us know how it was!