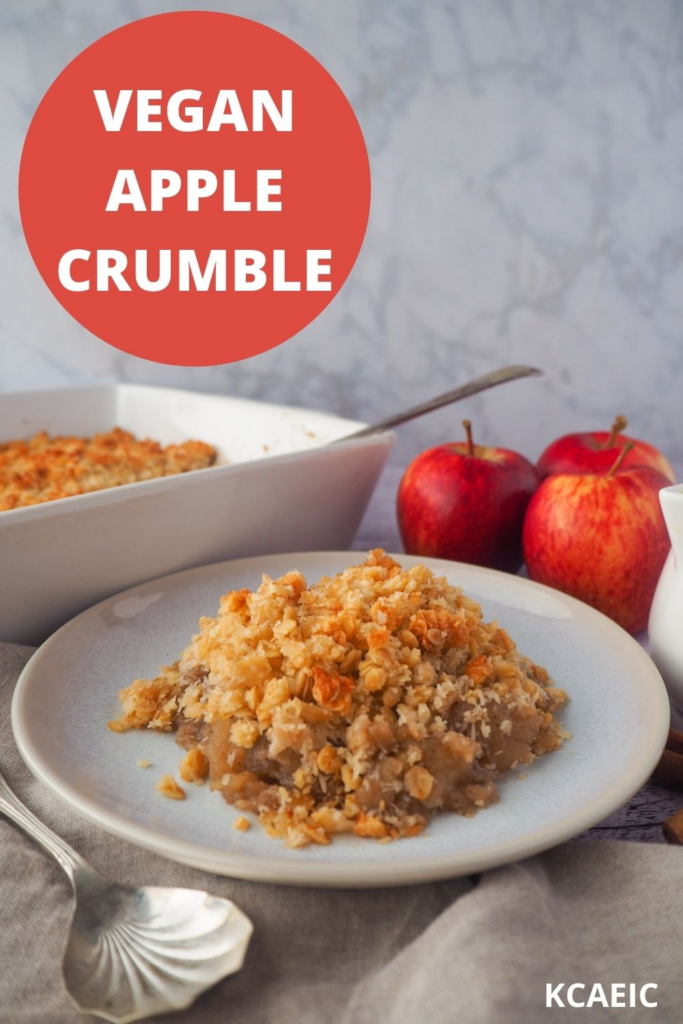 This vegan apple crumble is bursting with all wonderful fall favors you love. Serve it with my vegan custard or ice cream for the perfect cozy night in.

This vegan apple crisp is a version of my regular apple crumble (apple crisp) but with some updates to make a plant based and a more healthy apple crumble. There's a plant based margarine instead of dairy butter and no refined sugar, just a bit of maple syrup to help naturally sweeten it. Still the same cozy flavors of apple and cinnamon with a crunchy topping of oats, coconut and no refined flour.

A note on flour - some crumbles, particularly ones with British origins, can be often be made with flour. I like to mix things up and make my crumbles with coconut and oats instead of flour. It adds some wonderful flavor and texture. If you prefer a more traditional crumble you can swap the oats or coconut for flour instead.

I developed this recipe in conjunction with my vegan custard and the two of them really are a match made in heaven. If you are looking for a cozy night in is really is the best combo! In fact I love this custard so much I've been whipping it up in flash to eat on my other fruit crumbles and desserts!

What's the difference crisp and a crumble?

A crisp and a crumble are very similar. The topping on both is crispy and crumbly. Depending on where you are in the world a crisp may mean baked fruit dish with a mixture of oats, butter, sugar and something else such as flour or coconut. A crumble on the other hand may be more flour based and may not have oats.

Confused? Don't be. All you need to know is they are both delicious not matter what you call them and two terms can generally be used interchangeably as I have here.

What can I substitute for butter in apple crisp?

I used vegan butter or margarine instead of butter in this apple crisp as I find it gives the best flavor. You could also substitute oil for butter in apple crumble if you use a mild tasting one such as refined coconut oil, or one that will match the flavors in the crumble.

Apples: I used royal gala apples in this recipe, but you can use any kind of firm, crisp apple that you like. You may need to add a little more or a little less maple syrup depending on how tart your apples are to start with.

Cinnamon: cinnamon and apples are a perfect match. Some ground cinnamon really brings out the fall flavors in this recipe. You you mix things up with nutmeg, all spice or even ginger.

Cloves: another perfect apple pairing. Ground cloves is quite a strong flavor, so you don't need to add much.

Maple syrup: a little maple syrup adds some sweetness to balance the tartness of the apples while also keeping this a refined sugar free treat. You could could use white or brown sugar instead if you prefer.

Desiccated coconut: is finely grated coconut, commonly used in baking. The fine texture mixes in well with the rest of the crumble topping and helps add some flavor and texture.

Vegan butter: you can use your favorite vegan butter or margarine in this recipe. The butter mixes in with the crumble topping to help giving it that lovely crunchy topping.

How to make vegan apple crumble

Peel and core the apples and cut into pieces. Put in a pot on the stove with the maple syrup, cinnamon and cloves and a splash of water. Bring to bubbling, then simmer for twenty or so minutes until the apples are starting to soften but still have some bite. Turn off the heat and roughly mash, leaving plenty of lumps.

Put the apple mix into a deep baking dish and smooth down. Spoon the topping over the apple mix, leaving plenty of bumpy bits to go nice and crispy.

Bake in the oven for thirty five minutes, or until the top is a lovely golden brown.

Why is my apple crumble not crispy?

You might not have enough butter or oil in your topping or your oven may not be up high enough. If the fruit has cooked you can try turning your oven up a bit, try an extra 20F (10C) and cook for another ten minutes or so.

This vegan apple crisp is best eaten hot and freshly baked. Fabulous on its own but truly sublime with lashings of my vegan custard. Delicious!

I do not recommend freezing this cobbler as I find the topping can go soggy when reheating. 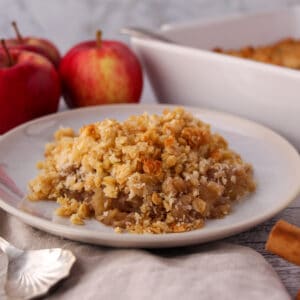 Keywords: apple crisp, vegan
Tried this recipe?Let us know how it was!