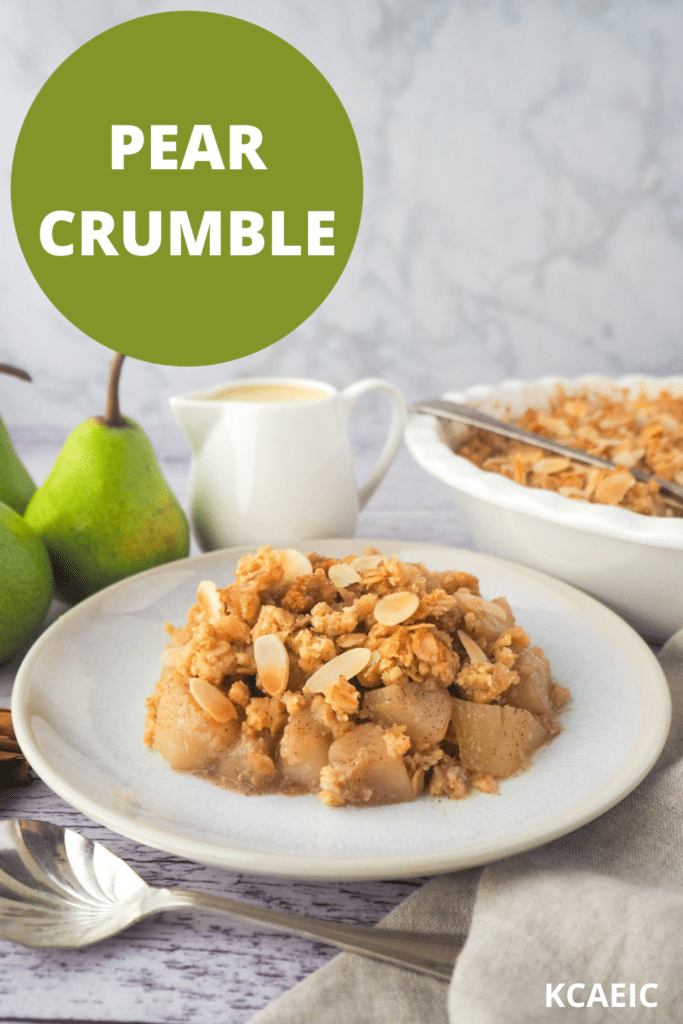 This pear crumble with the classic Fall flavors of cinnamon and vanilla is perfect winter comfort food. Serve with custard or ice cream for an epic cozy night in!

Crumbles or crisps are one of my favorite cozy desserts. They are simple to make, incredibly versatile and absolutely delicious. In fact you can find a range of fabulous crumbles on my blog, including crown pleasing apple crumble, rhubarb crumble, apple and plum crumble, feijoa crumble, and a vegan apple crumble for my plant-based friends.

So when the shelves were groaning with beautiful pears this Fall I just had to turn them into a pear crisp. Pears are naturally sweet, so there's not a lot of extra sugar needed in this recipe. But because the pears can release a lot of water it's best to pre-bake the pears before adding the crumble topping. This will ensure your pear crisp stays crispy instead of soggy!

Can you use unripe pears in a crumble?

Yes you can. You will need to cook the pears for longer and may need to add some extra sugar to make up for the lack of natural sugars in the pears. Otherwise a fruit crumble or crisp is a great way to use unripe pears.

How do you fix runny crumble?

How to fix a runny crumble depends on what stage of cooking you are at.

If you have Not added your crumble topping yet,
- Remove the crumble from the oven. Scoop out a couple of spoons of juice and pop into the fridge to cool. Once cool mix in half a table spoon of cornflour to the juice to form a slurry, then mix into the fruit. If you add the cornflour directly to the hot fruit it will go lumpy. Turn the oven down as low as you can and bake for a further fifteen minutes or until some of the water has evaporated and the juices have thickened.

If you Already added your crumble topping
Turn the oven down as low as you can and bake for a further fifteen minutes or until some of the water has evaporated and the juices have thickened. You could try the above method by remove the topping and mixing in cornflour, but this is likely to be messy. It will still likely be delicious so enjoy your crumble and remember to gently cook down your fruit next time.

Pears:  The beauty of this recipe is it works no matter how ripe your pears are. If you have crunchy pears you can cook them a little longer to soften them up but its also great for using up really ripe pears that are on their last legs and are just about to become over ripe.

Cinnamon: some ground cinnamon goes perfectly with these pears. You could mix things up by adding some other warming spices, such as cloves, ginger or nutmeg.

Brown sugar: also known as light brown sugar, adds to the caramel notes of this recipe. You could use white sugar if you prefer, or experiment with dark brown sugar.

Butter: the butter mixes in with the crumble topping to help giving it that lovely crunchy topping. For a dairy free option you could swap the butter with margarine.

Corn flour: also known as corn starch or maize starch. It provides a natural thickness this fruit crumble. You could try replacing the corn starch with tapioca or arrow root starch.

How to make pear crumble

Peel and core the pears and cut into chunks. Add the pear chunks to a baking dish with the cinnamon and vanilla extract. Stir well. Add the corn flour and stir well. Bake the pears in the oven for thirty minutes or until starting to soften and the juices have started to bake off and concentrate.

Remove the pears from the oven and give them a good stir. Add the crumble topping, leaving plenty of lumpy bits to get nice and crispy. Bake for twenty five minutes or until golden brown.

This baked fruit crumble is best served warm from the oven. Fabulous on its own, or with some of my sour cream ice cream, vanilla ice cream or my vegan custard (that does Not taste like vegan custard, even my husband couldn't tell the difference!)

I do not recommend freezing this crumble as I find the topping can go soggy when reheating. 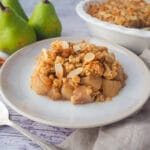