I have a funny relationship with sultanas, I can't stand them on their own. I always buy fruit free muesli and have been known to pick out the sultanas and transfer them to my best friends plate if faced with a bowl of regular muesli 😀

If they are mixed into ice cream or baked goods they are fine. I will happily eat sultanas in ice cream, be in this one or my ice cream Christmas pudding, any kind of seasonal baking such as hot cross buns or mince tarts.

Pour the milk and cream into a small saucepan. Add spices. Simmer over a low heat until warmed through, about five minutes.

If you are using a double boiler for this recipe put the or pot on first to boil.

Seperate yokes from whites and put aside for another recipe, such as my easy meringues. Add yokes and brown sugar to a bowl and beat until pale brown.

I like this one which fits nicely into one of my regular pots. You can make the ice cream without it, but you will need to have the heat on very low and watch it carefully to prevent the eggs scrambling.

Cook until mix coats the back of a spoon or spatular, stiring frequently. Cool mix for a few minutes.

Hot tip: you can stand the double boiler in a colander for a few minutes to help the mix cool down, especially if using a round bottomed double boiler.

Before churning ice cream put your storage container into the freezer to chill. This will help stop your ice cream melting so fast after churning and prevent larger ice crystals forming on refreezing.

Put your sultans and mixed peel into a heatproof bowl and cover with about a cup of boiling water to make them plump and juicy. Drain well just before adding to ice cream.

Churn ice cream in churner. Unlike some of my other ice cream recipes this a relatively small mix so I find it only takes about fifteen minutes to churn. Transfer to chilled container, mixing through rehydrated sultanas and mixed peel as your transfer it into the container. It will be the consistency of soft serve when done. Freeze overnight to firm up

Preheat oven to (220C). Break up hot cross but into small pieces onto a baking tray and space out well. This a great one for using up stale hot cross buns. Melt butter and brush over pieces.

Remove from oven and cool. Add to a small food processor with brown sugar and blitz until forms lovely crunchy crumbs. Do not over blitz, a few larger pieces is find. If you don't have a food processor you can give the pieces a bash in bowl with the end of rolling pin, just be careful not to cover the kitchen with crumbs!

Remove ice cream from freezer a few minutes before serving to soften up. Scoop into bowls and sprinkle over hot cross bun crumb.

This ice cream will store well in an airtight container in the freezer for up to two weeks. After that it may start to become a little icy, but it will still taste delicious!

Have you made this recipe? Tell me how it went in the comments below and tag me on Instagram so I can see your delicious creations! @keep_calm_and_eat_icecream 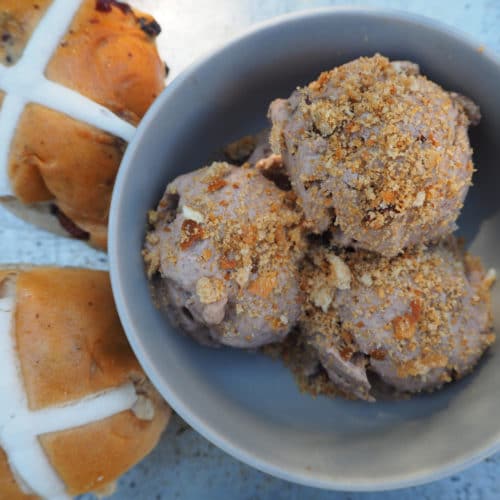 You can use sultanas or raisins in this recipe for a traditional taste, or experiment with any other dried fruit you like.   The mixed peel is optional but I think it gives the ice cream a lovely fresh tang. If making the ice cream for adults you could add a tablespoon of alcohol such as brandy to the hot water when rehydrating the fruit for an extra kick of flavour.   The hot cross bun crumb is optional but again gives this dish a lovely crunchy element and is a great way to use up stale hot cross buns.  The crumb is also delicious on regular ice cream such as vanilla or chocolate.

Keywords: creme anglaise ice cream base, custard based ice cream, Easter
Tried this recipe?Let us know how it was!
17 shares