This peanut butter and jelly ice cream takes one of your favourite sandwich fillings and turns it into a delicious frozen dessert.

In Australia peanut butter and jelly sandwiches are referred to as peanut butter and jam sandwiches. Jelly in Australia usually means the wobbly, artificially flavoured and coloured stuff from a small cardboard box you add boiling water to and refrigerate, sometimes called Jello in other countries. I use the term jelly and jam interchangeably here, but according to some jelly technically refers to sweetened, clear fruit juice that's set with pectin.

I always think of peanut butter and jam sandwiches as a breakfast food to be eaten on toast in the morning but people the world over enjoy them at any time. And now you can enjoy it as a dessert! Like many of my other ice cream recipes, this is egg free with no custard base. The only cooking needed is for the raspberry jelly.

To make the peanut butter and jelly ice cream

Combine the cream, peanut butter, brown sugar, vanilla essence and salt in a large bowl. Beat with a hand beater or stand mixer until it's thick and resembles whipped cream.

Chill in the fridge until nice and cold, at least three or four hours.

Before churning, make the raspberry jelly

If you're using a self-churning ice cream machine like my Cuisinart turn it on for at least ten minutes before churning to chill the machine down.

Churn the ice cream. If using crunchy peanut butter you may find it sticks somewhat when churning. You could try poking it very carefully through the lid to get it going, or stopping the machine Briefly to move the mix. Don't leave it for more than a few seconds or the ice cream will start to freeze and the machine won't start again And/Or you could damage the machine's motor.

To make the raspberry jelly

Add raspberries, sugar and jam set if using to a small saucepan. Simmer for five to ten minutes until the raspberries break down and the jelly starts to thicken.

Remove from heat and cool. If a smoother jelly is desired, strain the jelly. As the jelly cools it will become thick and difficult to strain. You may need to work at it (good for those arm muscles!). Try using the back of a plastic cup to help get the mix through, otherwise, for a more chunky jelly leave the seeds in.

Chill in the fridge, then transfer to a piping bag to assemble ice cream (optional)

Transfer churned peanut butter ice cream to a chilled container. Using the pointy end of a spoon create a snaking valley through the ice cream. Pipe the raspberry jelly into the valley and smooth over. You may want to keep some jelly to serve at the end.

Hot tip: Alternatively layer peanut butter ice cream and raspberry jelly into the container until done. You will get a less rippled effect but it will be easier to assemble and will still taste delicious.

Freeze overnight or until desired firmness is reached.

Scoop the ice cream into bowls, Top with leftover jelly and sprinkle with chopped peanuts.

Dig in and enjoy!

Have you made this recipe? I'd love to know how it went in the comments below 🙂 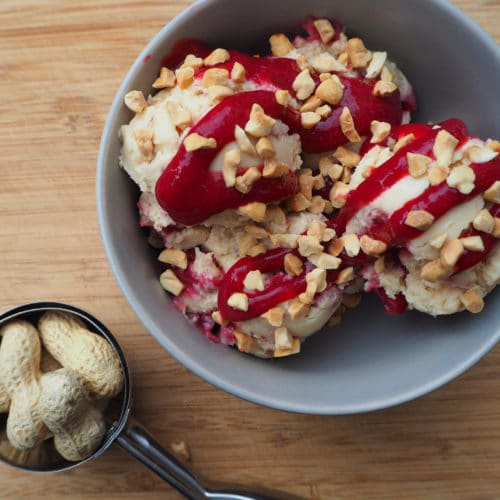 To assemble the peanut butter and jelly ice cream

This recipe makes a raspberry jelly but you could replace this with strawberries if you wish. Using crunchy peanut butter may make it harder to churn.  You can use smooth peanut butter instead and add extra chopped peanuts for crunch at the end.

Keywords: ice cream machine, jam, peanut butter
Tried this recipe?Let us know how it was!
80 shares