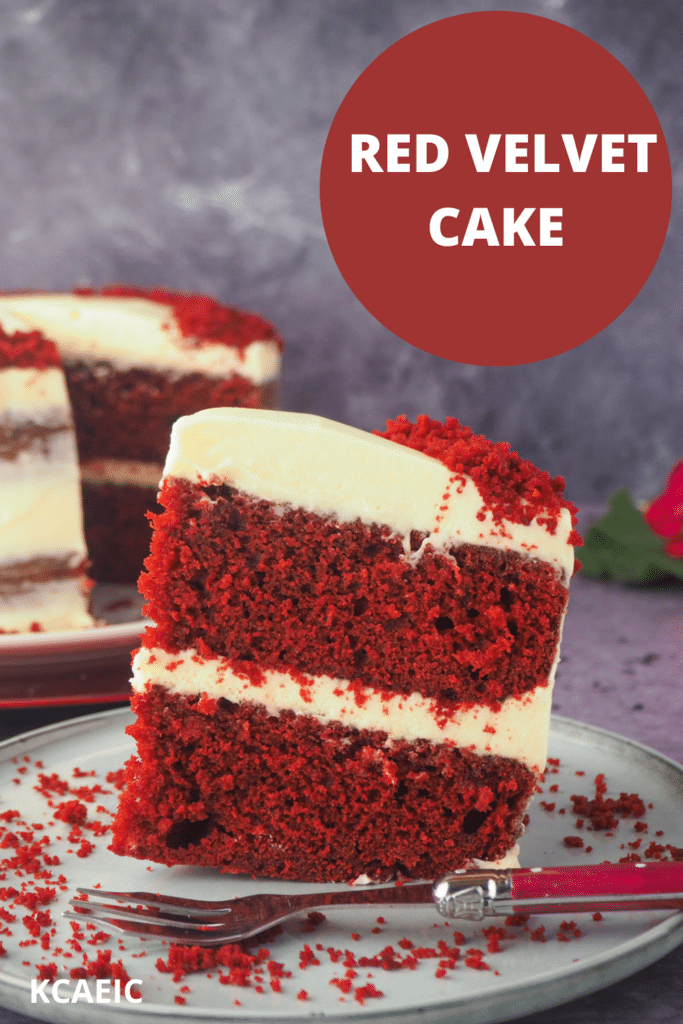 This chocolate red velvet cake is light and velvety. With a fabulous fine crumb and tangy cream cheese frosting, it's pretty as a picture and looks as good as it tastes!

What is red velvet cake?

Red velvet cake is a red-colored cake that ranges from a mild reddish-brown color to fire-engine crimson red.

What flavor is red velvet cake?

Red velvet cake is like a subtle chocolate cake crossed with a vanilla cake on steroids. Its usually made with buttermilk which gives it a slightly tangy taste, which is enhanced by the cream cheese frosting it's often made with.

Is a red velvet cake just a chocolate cake?

There are a few theories about the origin of this now much-loved cake. One is that it came about in the USA in World War II. Due to rationing ingredients such as chocolate and cocoa were hard to get hold of so red velvet cake may have come about because it uses cocoa instead of chocolate, and less of it. The reddish color may have been originally created by combining the natural, raw cocoa powder with acidic ingredients such as vinegar and buttermilk, giving a natural although far more muted reddish-brown color.

Separate from this beetroot juice was sometimes also used to color and moisten cakes due to limited other ingredients, creating a natural red color coupled with beet flavoring, interesting! Even before this time 'velvet' cakes had been around for some time, the name was a fancy way of referring to a cake with a finer crumb that was more 'velvety' in texture.

The brightly red-colored cake we are more familiar with is generally credited to Mr. Adams and his wife from Adam Extract. The story goes he and his wife had a red velvet cake made with beets at the Waldorf Astoria in New York. Apparently they saw an opportunity to sell more food extracts by replacing the beets with red food coloring and other extracts such as vanilla. And even then, the red velvet cake served at the Waldorf Astoria was a version of one of these beet-colored cakes floating around during World War II. Adam's recipe was published with an ermine or French-style butter roux icing. Its light and fluffy but can be time-consuming to prepare and was later replaced with the simpler, tangy cream cheese frosting we are more familiar with.

The cake remained a constant presence in home kitchens for years but didn't take off until the movie Steel Magnolias, which included an impressive red velvet armadillo-shaped cake. It gained massive popularity in the early 2000s, spawning everything from red velvet cupcakes, lattes, pop tarts and donuts to candles, body spray and lip balms.

Regardless of its origins this brightly colored cake has cemented its place on menus and kitchens around the world. This is my version and I hope you love it as much as I do.

Can't get enough of red velvet? Why not try making my red velvet ice cream which takes this dreamy cake flavor and turns it into fabulous ice cream, or my red velvet Oreo cheesecake. Delicious!

Red food color: is needed to get that bright fire engine red color we all know and love.

Plain flour: is best in this recipe. You can also use all-purpose flour. It's important to use flour that does not have any rising agents as we will be adding our own in the right amounts to help this cake rise.

Corn flour: also known as corn starch and can be labeled as wheaten cornflour or corn (maize). The cornflour makes the cake crumb softer and makes for a lighter, velvety cake.

Baking soda: also known as bicarbonate soda or bicarb. This is NOT the same as baking powder and you can not substitute this.

Milk (not pictured): full cream milk is best for this recipe. I rarely have buttermilk in the house but it's so easy to make your own with milk and a little lemon juice. You could use buttermilk instead if you prefer.

Butter: unsalted butter is best or your risk your cake being too salty. It's important your butter is a room temperature before you start baking so your batter comes together and your cake rises.

Vegetable oil: adds some much-needed fats to this cake and helps keep the crumb nice a fine. You can try substituting with similar oils such as peanut or canola.

Powdered sugar: also called icing sugar, it's used in the cream cheese frosting for this cake.

Lemons: a dash of lemon juice helps balance the sweetness of the cream cheese and is used to make the homemade buttermilk. Fresh is best, I don't recommend bottled lemon juice.

To make the cake:

Add the lemon juice to the milk and allow it to sit for five minutes to make buttermilk.

Put the room temperature butter in a large bowl with the sugar and beat with electric hand beaters or in a stand mixer until pale and creamy. Add the eggs one at a time, mixing between each addition.

Sift the cocoa powder into the butter mix and add the red food color and vanilla extract. Mix well. Add the oil and mix well.

Allow to cool completely before assembling and icing the cake.

To make the cream cheese frosting and assemble the cake.

Add the room temperature cream cheese and butter for the frosting, vanilla to a bowl and mix until creamy. Sift in the powdered sugar and beat well. Add the lemon juice and beat until soft and fluffy.

Trim the domed tops from the cakes a little. Keep the discards and blitz into crumbs in a food processor or break up with your hands. You can flip over the cake that goes on top so you have a nice flat top.

Cover the top of your first cake with cream cheese frosting. Add the second layer of cake and repeat again. Spread the sides of the cake with frosting. I like to scrap mine gently down to the cake for a semi-naked look, but you can cover the sides completely if you prefer. Gently sprinkle a circle of pretty red crumbs around the top of the edge of your cake and you're done!

To serve pop onto a plate, slice and enjoy! Perfect for morning or afternoon tea or Valentine's day. Delicious!

This cake is best eaten fresh on the days it's made. You can store it in a covered container in the fridge for up to three days. 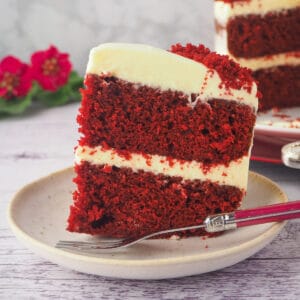 To make the cakes

To make the cream cheese frosting and assemble the cake.

Recipe time above is hand-on time and cooking time, it does not include cooling time for the cake, which needs to be completely cool before you frost it, or your frosting will melt! This recipe makes a very generously frosted cake.  If you like less frosting you can reduce it to three-quarters of the recipe or even half.

Keywords: cream cheese frosting, traditional
Tried this recipe?Let us know how it was!