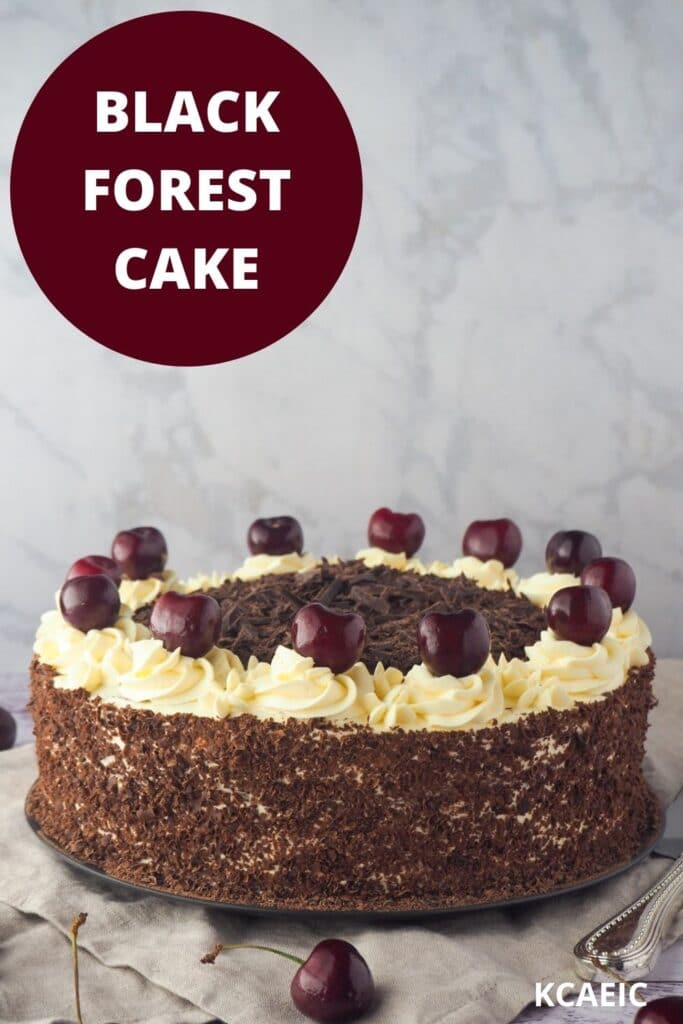 German black forest cake or black forest gateau is a chocolate sponge cake filled with cherries, whipped cream and kirsch. This recipe is very much based on the traditional German Schwarzwälder Kirschtorte, with three layer of chocolate sponge, kirschwasser (sour cherry brandy) and sour cherries. It was incredibly popular in the 1950's and still remains a popular choice for a show stopping dessert.

Why do they call it Black Forest cake?

There's some debate over the origins of Black Forest Cake. Its generally thought to have come from the Black Forest mountain region in southwestern Germany where kirschwasser comes from. Other schools of thought suggest the cake is based on the traditional costume of the women of the Black Forest region, with a characteristic hat with big, red pom poms on top, called Bollenhut. Whatever you call it this creamy chocolaty cherry cake tastes delicious!

Can I make this black forest cake without alcohol?

Yes you can. You can replace the alcohol with cherry juice in the cake and omit it from the cream, or leave out altogether if you prefer.

Can I use regular cherries?

Yes you can. If you can't get sour/Morello cherries you could use a tin of cherry pie filling or black cherries. You could also try using fresh cherries with some cherry juice or jam. You may need to add a little more lemon juice and a little less sugar to balance the flavors and get that sour cherry taste.

Can I use a different chocolate cake?

Yes you can. If you don't want to use the traditional chocolate sponge cake here you can use your favorite regular chocolate cake.

Can I make an easier version of this cake?

You sure can. The easiest change it to cut the cake in half instead of into three layers. You can also forgo the grated chocolate coating around the outside and simply pile the chocolate on top instead. Your cake will still taste delicious but will be a bit less fiddly to make!

Sour cherries: also known as tart cherries. The most common variety is Morello cherries. If you can't get sour cherries you could use regular cherries, or possibly a tin of cherry pie filling, but you will need to add a little more lemon juice and a bit less sugar to account for the sweeter cherries.

Fresh cherries: are used to garnish this beautiful cake. You could use Maraschino cherries for a bright burst of color, or leave them off if you prefer.

Dark chocolate: a good dark bitter chocolate is used to decorate the outside of this cake and makes a good substitute for chocolate flakes. If you can get hold of them you could also use chocolate flakes or Schokoraspeln to give it a truly traditional Schwarzwälder Kirschtorte but they can be hard to get hold of outside Europe.

Thickened cream: I use thickened cream in Australia which as a fat content of about 34%. You could also use heavy whipping cream which is similar.

Cinnamon: a little ground cinnamon is a traditional addition to the cherries in this black forest cake and helps add another flavor dimension.

Kirsh: also known as kirschwasser, is a clear, colorless brandy traditionally made from sour cherries that originates from Germany. Its a traditional ingredient in German Black Forest Cake. Kirsh is pretty strong, with an abv of around 40%. You could substitute with a milder cherry alcohol such as cherry liquor if you prefer, or with cherry juice for an alcohol-free version.

Lemon juice: fresh lemon juice is best for this recipe. You will need one tablespoon or approximately the juice from half a lemon, depending on how big and juicy your lemon is.

Plain flour: is best in this recipe. You can also use all purpose flour. It's important to use a flour that does not have any rising agents as we will be adding our own in the right amounts to help this cake rise.

Corn flour: also known as corn starch and can be labeled as wheaten cornflour or corn (maize). The cornflour makes the cake crumb softer and makes for a lighter sponge cake.

White sugar: white sugar is best in this recipe. You could use castor sugar if you prefer. I don't recommend using other types of sugar, they will be hard to dissolve and will compete with the flavors in this cake.

Baking powder: is a common ingredient in cakes and baking, used to help the cake rise. For the best results use fresh baking powder and not one that's been sitting around the cupboard for a while.

Gelatine: a little gelatine helps stabilize the whipped cream and keep it looking beautiful for longer, but it does mean the cake is not vegetarian. If you are eating the cake straight away you could skip the gelatine.

To make the cake

Grease and line a ten-inch cake tin. Preheat your oven to 375°F (190°C/170°C fan-forced). Add the eggs and sugar to a bowl or stand mixer. Beat on medium-high for about fifteen to twenty minutes or until thick, pale and creamy.

Melt the butter and allow it to cool. Sift in the flour, cocoa, cornflour and salt and fold into the mix. Pour into the prepared cake tin and bake for thirty minutes or until toothpick inserted comes out clean. Allow to cool completely before assembling the cake.

To make the cherry filling

Drain the cherries over a small pot. Put the cherries aside in a heatproof bowl. Add the cinnamon, lemon juice, sugar and cornflour to the cherry juice and whisk to combine. Heat on medium for about five minutes or until sauce thickens. Remove from stove and add back to cherries. Set aside to cool.

To make the cream and assemble the cake

Grate half the dark chocolate and chop the other half into long thin pieces. Use a large sharp knife to carefully cake the cake into three layers. For perfectly even layers you can use a cake saw to achieve this.

Prepare your piping bag and nozzle. If using, put two tablespoons of room temperature water into a heatproof bowl and sprinkle with gelatin. Allow to bloom for five minutes or until your cream is whipped. Whip the cream until soft peaks form. Do not over whip. Add the sugar and mix well, then the kirsch and mix well.

Once the gelatin has bloomed, melt it by microwaving it for about ten to fifteen seconds. Mix well to ensure all the gelatin is mixed in and dissolved. Temper the gelatin by adding a couple of spoonfuls of the whipped cream and mix well. Add the tempered gelatin to the whipped cream by pouring it in slowly in batches while whipping the cream, ensuring it's mixed well between each addition. Put a couple of large spoonfuls of cream aside in the piping bag to decorate the top of the cake.

Hot tip: this cake ends up heavy and hard to move! I recommend assembling it on the plate you intend to serve it on, as it will be difficult to transfer once its assembled.

Brush the bottom layer of the cake with the kirsch for the cake. Add the cherries and spread around, leaving about half an inch from the edge of the cake.

Use a dough scraper or similar to hold the grated chocolate next to the cake and then push it off onto the cake. Work your way around the cake, pushing and sprinkling as you go. You won't need the full amount of grated chocolate but it's easier to have extra to work with.

Use the piping bag to pipe cream swirls around the edge of the cake. Sprinkle the chopped chocolate in the middle of the cake, saving some of the large pieces to pile on top.

Finally top the cream swirls with fresh cherries and you're done!

To serve use a big knife to slice this cake and enjoy! Wonderful with a cup of coffee or a warming shot of kirschwasser. Delicious!

Because of the cream this cakes needs to be stored in the fridge. It's best eaten on the day it's made for maximum freshness, although at a pinch you can make it the night before eating. The bottom layer of cake has a tendency to go soggy over time. Still delicious but a little harder to serve. It will otherwise keep in a covered container in the fridge for up to three days. 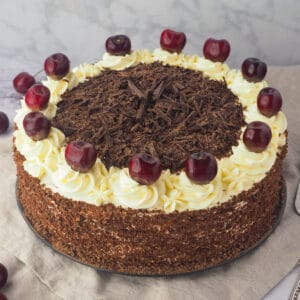 Cream and assembling the cake

Keywords: Black Forest Cake, gâteau
Tried this recipe?Let us know how it was!