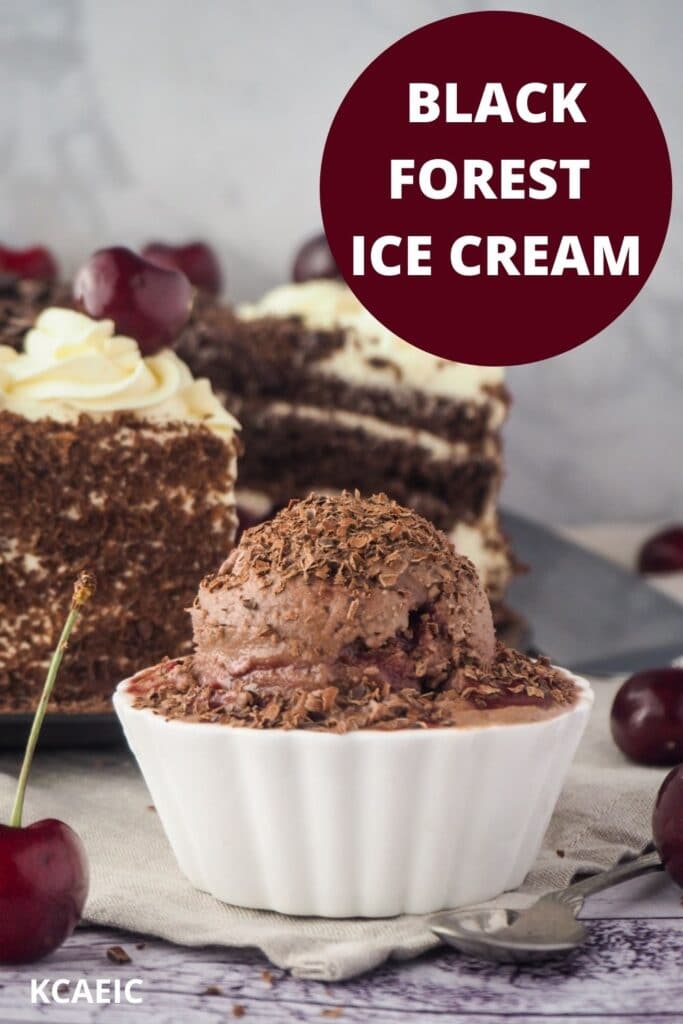 This black forest ice cream much like the cake is pure indulgence. With decadent chocolate ice cream, a tangy cherry swirl and a hint of kirschwasser.

This chocolate cherry ice cream is inspired by one of my favorite cakes, traditional black forest cake. It's a decadent mix of rich chocolate ice cream with a tangy cherry swirl and flakes of dark chocolate.

This ice cream is philly style so there are no eggs and no custard. And it's made with Dutch cocoa powder which gives that darker black forest cake color and it's easier to dissolve into the ice cream mix.

Can I make this black forest cake ice cream without alcohol?

Yes you can. You can replace the alcohol with a little glucose syrup. You can make the ice cream without either, but it will freeze very firm and you will likely need to leave the ice cream out for several minutes to make it soft enough to scoop.

Can I use regular cherries?

Yes you can. If you can't get sour/ or Morello cherries you could use a tin of cherry pie filling or black cherries. You could also try using fresh cherries with some cherry juice or jam. You may need to add a little more lemon juice and a little less sugar to balance the flavors and get that sour cherry taste.

Can I make a no-churn version of this ice cream?

Yes you can. If you don't have an ice cream churner you could try making my no churn chocolate ice cream and adding the cherry swirl to that. It will have a slightly different taste due to the different chocolate used, but it will still taste delicious.

Sour cherries: also known as tart cherries. The most common variety is Morello. If you can't get sour cherries you could use regular cherries, or possibly a tin of cherry pie filling, but you will need to add a little more lemon juice and a bit less sugar to account for the sweeter cherries.

Kirsch: also known as kirschwasser, is a clear, colorless spirit traditionally made from sour cherries that originates from Germany. It's a traditional ingredient in German Black Forest Cake. Kirsch is pretty strong, with an abv of around 40%. You could substitute with milder cherry alcohol such as cherry liquor if you prefer. For an alcohol-free version you could replace it with half a tablespoon (15gms) glucose syrup.

Cinnamon: a little ground cinnamon is a traditional addition to the cherries in this black forest cake ice cream and helps add another flavor dimension.

Lemon juice: fresh lemon juice is best for this recipe. You will need one tablespoon or approximately the juice from half a lemon, depending on how big and juicy your lemon is.

Thickened cream: I use thickened cream in Australia which has a fat content of about 34%. You could also use heavy cream or heavy whipping cream which is similar.

Milk: this recipe uses full-fat milk with a fat content of about 3.5%.

White sugar: white sugar is best in this recipe. You could use castor sugar if you prefer. I don't recommend using other types of sugar, they will be hard to dissolve and will compete with the flavors in this ice cream.

Tapioca starch: is a natural and accessible way of both thickening and stabilizing the ice cream. If you can't get tapioca starch you can use arrowroot powder or cornflour in the same volume.

Jam set: is used to set jam, funnily enough. It contains pectin which helps thicken the cherry jam swirl and stop it going as icy in the ice cream.

Glucose syrup: for an alcohol free version of this you can use glucose syrup, also called confectioner’s glucose. You can get in from specialty baking shops, online and some supermarkets. A small amount of glucose syrup helps lower the freezer point of cherry syrup and improves the texture.

You can substitute with the same amount of light corn syrup or powdered dextrose. Measure carefully, preferably using a digital kitchen scale, and don't add to much or it will melt in a red hot minute!

Add the milk, cream, and Dutch cocoa powder to a small pot on the stove. Heat on medium, stirring until the sugar is dissolved. If you are having trouble incorporating the cocoa powder you can carefully give it a blitz with an immersion blender. Add the Kirsch and stir well.

Mix the tapioca starch slurry well then add it to the pot and stir well. Remove from heat and allow to cool. Transfer to a heatproof container, cover and chill in the fridge for at least four hours, preferably overnight.

While the chocolate ice cream base is chilling, make your cherry jam swirl.

To make the cherry jam and assemble the ice cream

Put the cherries and juice into a deep-sided jug and blitz with a stick/immersion blender until smooth. Alternatively you can blitz them in a food processor. Strain the mix to remove any large pieces. You should have about 1 & ⅔ cups (400mls) of liquid.

Add the strained, blitzed cherries to a pot with the sugar, lemon juice, cinnamon and jam set. Simmer for approximately thirty minutes, stirring frequently until the mix has reduced down to one cup in volume. Add the kirsh, remove from the heat and allow to cool. Transfer to a heat-proof container, cover and chill in the fridge until you assemble your ice cream.

Pour mix into ice cream churner and churn. It will be the consistency of soft-serve when done. Put the ice cream into the chilled container about a third at a time and layer it with spoonfuls of cherry swirl. Sprinkle the top with grated dark chocolate.

Eat immediately or transfer to the chilled container and freeze for four hours or until firm.

To serve remove from the freezer, scoop and enjoy! For even more of that black forest cake feel you can serve with some decadent whipped cream and some of my cherry compote drizzled over the top. Delicious! 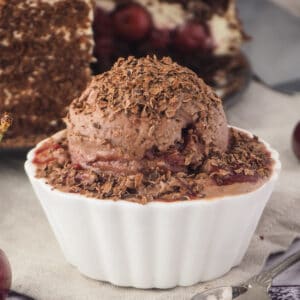 Keywords: Cherry chocolate ice cream
Tried this recipe?Let us know how it was!