This no churn Nutella ice cream has only four ingredients and does not need an ice cream maker. Its easy and super tasty.

Is there anything better than Nutella? How about a no churn Nutella ice cream that's super easy to make and has only four ingredients? Cha ching!

Most ice creams made without a churner use sweetened condensed milk, such as my no churn vanilla ice cream. This recipe uses cream cheese instead. I find the cream cheese here gives it a smoother texture that's less likely to become icy. The trade off here is the ice cream becomes more crumbly and less scoop-able, but still delicious!

To make the no churn Nutella ice cream

In a seperate bowl put in softened cream cheese and beat with a hand or stand mixer until cream cheese is soft and mixed through. Most of the cream cheese may be stuck to the beaters by now, that's OK, just carefully scrap some of it off.

Add the Nutella and beat until mixed through. Do not over whip as this will get beaten again when you add it to the cream.

Add the cream cheese and Nutella mix to the whiped cream in thirds, mixing lightly between each addition. When you add the last blob scrap down the bowl to make sure all the whiped cream has been mixed in.

The mix will resemble a fluffy chocolate mousse. You could eat it now if you want, but we're making ice cream! Carefully scrap into a freezer proof container, such as loaf or brownie tin.

Cover and freeze overnight or until firm. Remove from freezer a few mins before serving to soften.

Hot tip: The cream cheese gives this a lovely creamy taste and helps prevent that awful icy texture. The tradeoff is it can make the ice cream very crumbly and hard to get a smooth scoop. Still delicious and worth it for not having to use an ice cream maker.

Have you made this recipe? I'd love to know how it went in the comments below. 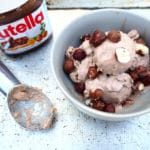 To make this nut free replace the Nutella with your chocolate spread of choice, just make sure its soft enough to mix in and adjust the quantity as needed.