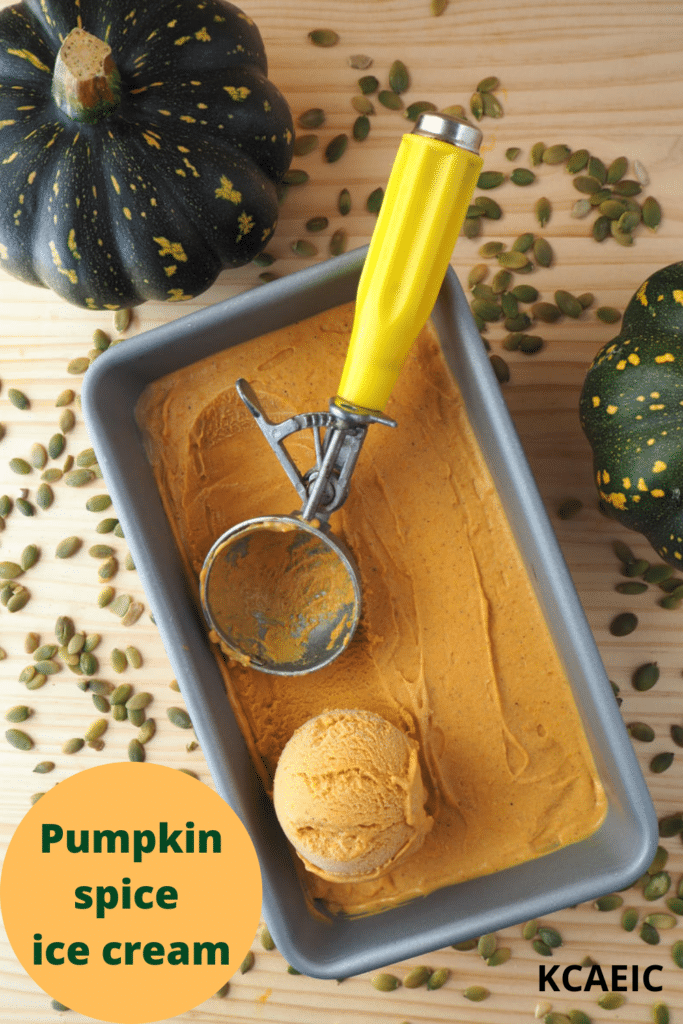 Move over pumpkin pie, there's a new pumpkin spice dessert in town and it's giving pie a run for its money. This pumpkin spice ice cream takes the flavors of pumpkin spice latte and elevates it to a whole new level. Who knew pumpkin could taste this good?

What do you do when it's officially Fall and you are dying for a pumpkin spice latte but because the weather hasn't got the memo yet it's still a billion degrees outside? The answer is the delicious spicy pumpkin ice cream. It's full of all the flavors of Fall you love but in a delicious, creamy pumpkin dessert. It's a great alternative if you're looking for a change from traditional pumpkin pie at Thanksgiving or just to make the most of wonderful Fall flavors.

NB: the recipe originally had full cream milk as well as cream. When I tested the recipe I found it worked better with Just the cream and dropped the milk. It works better this way, but I didn't get around to re-taking the ingredient photo. Next time I have my camera out I'll fix this! There is no milk in the recipe.

Pumpkin: I use butternut pumpkin in this recipe, sometimes called butternut squash. I find it has a sweeter flavor than traditional round pumpkins, but you can use whatever type you prefer as long as it's one that you like eating it. You could substitute with one cup of pumpkin puree from a can but make sure it's just pumpkin and not pumpkin pie mix. Canned pumpkin may not have the same depth of flavor compared to roasting your own.

Brown sugar: I use brown sugar, sometimes also called light brown sugar, to give it extra caramel notes. You could try it with the same amount of dark brown sugar or even regular white sugar.

Egg yolks: I use large eggs in this recipe. You can put the egg whites aside for another recipe such as my amaretti cookies or pretty rainbow meringues.

Cream: I use thickened cream in Australia which has a fat content of about 34%. You could also use heavy cream or heavy whipping cream which is similar.

Glucose syrup): sometimes called confectioner’s glucose. You can get in from specialty baking shops, online and some supermarkets. A small amount of glucose syrup helps lower the freezer point of ice cream and improves the texture and scoop-ability of the ice cream. You can substitute with the same amount of light corn syrup or powdered dextrose. Measure carefully and don't add too much or your ice cream will melt in a red hot minute!

I make my own pumpkin spice mix for this recipe, using a classic spice combination. The recipe makes about two and a half tablespoons of spice mix, but you will only need one tablespoon for the recipe. Put the rest aside to make something else with.

Cinnamon: for this recipe I use regular ground cinnamon or cassia, available from the supermarket. True cinnamon is much harder to get hold of but you could use that too if you wish.

Nutmeg: I use ground nutmeg, you could try freshly grated nutmeg you like.

Allspice: I use ground allspice for this recipe.

Cloves: I used ground cloves in this recipe. They have a very strong taste so you only need a little bit

Preheat your oven first. Peel the pumpkin and cut it into small cubes about ½ inch big. Drizzle with a little oil and spread them out over two baking trays, making sure they are not touching and leaving plenty of space between each piece. Bake for approximately one hour, turning once, until golden brown on both sides. Oven times may vary so I recommend checking on the pumpkin after twenty minutes and adjusting the baking time accordingly.

Remove pumpkin from oven and allow to cool.

This in turn blitzes down to about 1 cup (.6lbs/280gms) of concentrated roasted pumpkin puree. If you have significantly more than this you may not have cooked your pumpkin for long enough.

Make the pumpkin spice mix. Add the cinnamon, ginger, nutmeg, allspice and cloves to a small bowl and mix well. Measure one tablespoon of spice mix and put the rest aside for another recipe.

If using a double boiler, put the water on to boil. Put the cream into a small pot and put on low heat.

Separate your egg yokes and put the whites aside for another recipe. Put the egg yokes into a bowl with brown sugar. If you are not using digital scales to measure your brown sugar make sure the cup is tightly packed when measuring it. Beat the sugar and egg yokes together until pale and creamy. Slowly add the warmed cream, about a third at a time to temper the egg yokes, mixing well between each addition.

Pour the mix into the top of a double boiler that's on low heat. You can use a medium-sized saucepan instead if you don't have a double boiler, but you will need to watch it Very carefully, put it on very low heat and stir frequently to prevent the eggs from scrambling.

Remove about half a cup of cream, egg yolk and sugar mix and add to roasted pumpkin in a bowl you can use an immersion blender in. Blend until the pumpkin is smooth and creamy.

Add pureed pumpkin mix to ice cream mix in a double boiler. Add pumpkin spice and glucose syrup if using. Remember you only need one tablespoon of the pumpkin spice mix, put the rest aside for another recipe. Mix well. If the mix is lumpy you may need to very carefully blitz it with an immersion blender, taking extreme care as the mix will be hot.

Cook the ice cream mix, stirring frequently and scraping down the edges. The ice cream mix is done when it starts to thicken and coats the back of a spoon or spatula. To test this you can run your finger through the mix. If the line stays the mix is done.

Remove from heat and allow to cool. Add salt and vanilla essence and mix well. Transfer the mix to a covered heatproof container and chill in the fridge for at least four hours.

Churn the ice cream. It will be the consistency of soft-serve when done. Transfer to the chilled container and freeze for at least four hours or until firm.

Remove from the freezer, scoop and enjoy! If you have not used the optional glucose syrup you may need to leave it in the fridge for ten minutes or so to make it soft enough to scoop. Fabulous with some crushed-up ginger snaps or your favorite cookie crumbled over the top for that extra pumpkin pie feel. Delicious!

This recipe using butternut pumpkin, also called butternut squash.  You can use any type of pumpkin you like, as long as its one you like to eat.   You could substitute the roast pumpkin with a can of pure pumpkin.  Make sure it has only pumpkin and is not a pumpkin pie mix.