×
You are here: Home / Crumbles and Cobblers / Pear and rhubarb cobbler
319 shares
Jump to Recipe 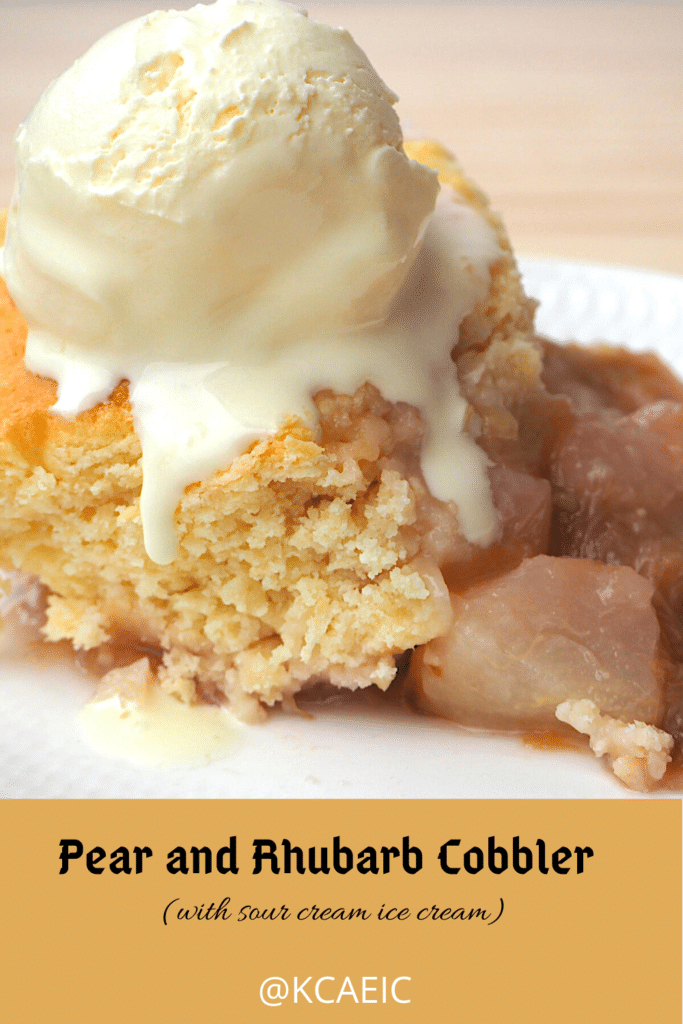 This pear and rhubarb cobbler combines sweet pears with tangy rhubarb and a fluffy cobbler topping for a warming dessert that's perfect for cozying up on the couch.

What is a fruit cobbler? 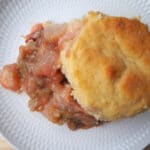 Fruit cobblers are baked dishes with a layer of fruit on the bottom, topped with a layer of dropped biscuit (United States) or dumpling (UK). Even the term 'biscuit' here is somewhat confusing. In America theses often refer to fluffy sweet or savoury items that the UK and Australia would more commonly refer to as scones.

The exact origins of the term cobbler is unknown, but is thought by some to come from the fact the round topping resembled street cobbles.

In my version here its all made in one pan, so there's less dishes to do. Unlike traditional scones or biscuits uses thickened cream instead of butter there is not rubbing in of butter needed. You just mix the dry ingredients and add the cream!

Rhubarb is technically a vegetable however is often used as a fruit in baked desserts. It has a tangy, sour, slightly sweet taste. The plant itself has big flat leaves and long, fleshy stalks that are usually crimson red but can also be pink and even green. The leaves are poisonous but you would would have to eat a lot to get sick. Rhubarb is typically very productive once established and easy to grow, so its a common addition to many vegetable gardens.

Pears: you can use whatever pears you like in this recipe, just make sure they are ripe and starting to soften, not rock hard.

Rhubarb: usually sold in bundles of stalks from some supermarkets and fruit and veg stores, with or without the leaves still attached. Look for fresh, firm, fleshly stalks.

Thickened cream: it doesn't matter what sort, it just needs to be about 35% fat.

🔪 How to make the cobbler

To make the fruit filling

Cut the leaves off the rhubarb if still attached and discard. Never eat rhubarb leaves, they are poisonous. Wash the rhubarb stalks and trim the ends. If the stalks are particularly woody you can remove the fibrous outer layer, particularly the inner flat edge as shown.

Cut the stalks into approx ½ inch (1.5cm) pieces and add to the cast iron dutch oven.

Peel and core the pears and cut into pieces. Add to the pan with the rhubarb and a splash of water. Cook for about five minutes on a medium heat until just starting to soften. Turn off heat and leave to cool while you make the cobbler topping

To make the cobbler topping

Mix the flour, sugar and salt together in a large bowl. Add the cream and mix until a shaggy dough forms.

For a pretty cobbler, dust a bench well with flour, tip out the cobbler topping and generously dust with flour again. Gently pat down the dough until its about ½ (1cm) thick. Dust a round scone cutter with flour and carefully cut out round 'cobbles' to top the cobbler with. Dust with extra flour as needed as the dough will be very sticky.

Alternatively spoon the cobbler topping onto the fruit in blobs of approximately one table spoon each. It wont be as pretty but it will still taste delicious!

Put into the preheated oven and bake for approximately 30 minutes or until golden brown.

Remove from oven, scoop into serving bowls and enjoy! Delicious with a scoop of my sour cream ice cream or no churn vanilla ice cream, whipped cream or both! With all that lovely baked fruit you could just about eat it for breakfast 🙂

This cobbler is best eaten fresh from the oven. It will keep covered in the fridge for up to three days. I do not recommend freezing this cobbler as I find the topping can go soggy when reheating.

Have you made this recipe? Tell me how it went in the comments below and tag me on instagram or Facebook so I can see your delicious creations! #KCAEIC 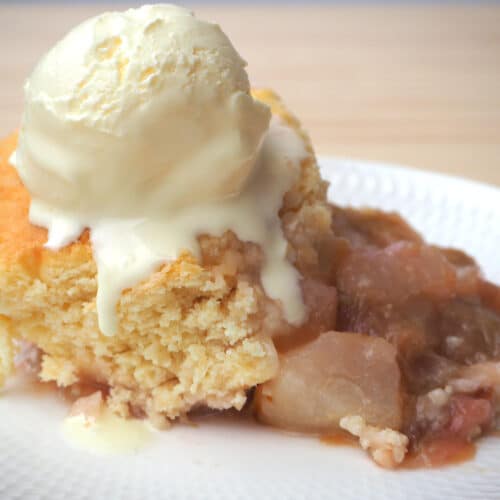 To make the fruit filling

To make the cobbler topping

To assemble the cobbler

Do not eat rhubarb leaves, they are poisonous. Rhubarb is available from some supermarkets and fruit and veg stores.

Keywords: cobbler
Tried this recipe?Let us know how it was!
319 shares