×
You are here: Home / Other Desserts / Banana split
143 shares
Jump to Recipe

This banana split is made with homemade banana ice cream for a delicious update on this classic dessert.

There is some contention over who created the banana split. The general consensus appears to be it was created by David "Doc" Strickler in 1904 in Latrobe, Pennsylvania. Others think it was created in 1907 by Ernest "Doc" Hazard in Wilmington. Several other locations around the same era also lay claim to its creation. Whoever created it the banana split was born out of the era of soda fountains which flourished from the late 1800s onwards, selling soda and ice cream by 'soda jerks'.

The classic banana split these days is usually a scoop of vanilla, chocolate and strawberry ice cream, covered in chocolate sauce and various toppings, between a split banana. I have given this classic dessert a modern twist with homemade banana ice cream which really elevates it to the next level of deliciousness!

What are maraschino cherries?

Maraschino cherries are preserved sweetened cherries. The natural cherry color is often removed and replaced with a food color to give the typical bright red color. They are used in many cocktails and are sometimes called cocktail cherries. They are often used as a garnish on ice cream sundaes, ice cream sodas and of course banana splits. In fact the term 'cherry on top' refers to the maraschino cherry often put on top of an ice cream sundae.

What sort of dish is a banana split served in?

Banana splits are traditionally served in a long dish that's curved at the ends called a boat. It is often a somewhat oval shape, with a flat bottom that curves up at the edges and holds the banana in place. If you don't have a boat dish you can make a banana split in a flat-bottomed bowl or it looks great deconstructed on a large plate.

Bananas: forms the split in the banana split. Use bananas that are ripe but not too ripe and without any brown spots.

Vanilla ice cream: Normally I would make my own easy vanilla ice cream recipe but I was running short on time, so this time I used store brought. You could substitute with your other favorite ice cream flavors that pair well with bananas, such as my chocolate or strawberry.

Chocolate sauce: I use store brought chocolate sauce in this recipe but you can make your own using the chocolate fudge sauce in my chocolate sundae recipe. You could also use different flavor sauces such as my strawberry sauce or caramel.

Whipped cream: I used whipped cream in a can for this recipe. This is super easy as you just spray it straight from the can, but it also has no structural integrity so it does tend to collapse quickly. You can make your own whipped cream if you prefer.

Chopped nuts: give some crunch and texture to this desert. I used chopped peanuts but you can use whatever nuts you prefer, or leave them out altogether.

Sprinkles: are a fun addition to this dessert. I used hundreds and thousands for a fun pop of color but you can use whatever sprinkles you like or leave them out altogether.

Maraschino cherries: are the literal cherry on top of this dessert, and help give it the classic look. I had a little trouble sourcing the maraschino cherries, I eventually found them in a liquor store in the cocktail section.

How to make a banana split

Gather your ingredients. Once you take the ice cream out of the freezer will start to melt, so you will need to make your dessert quickly.

Peel the banana and split it down the middle, taking care not to break it.

Scoop two scoops of banana and one scoop of vanilla and place them in a line in your bowl or on your plate with the vanilla ice cream in the middle.

Place the banana pieces on either side of the ice cream, either propped in the bowl or lying flat on the plate, curving outwards.

Drizzle generously with chocolate sauce over ice cream and banana. Top each scoop ice cream with a good squirt of whipped cream. Sprinkle with chopped nuts and sprinkles.

Finally pat dry three maraschino cherries dry and put them on top of the whipped cream.

Serve immediately and bask in the praise you'll receive from this delicious dessert!

The parts of the banana split are best stored individually and assembled right before serving. 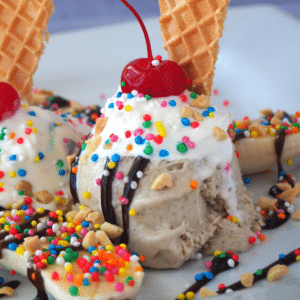 I use my homemade banana ice cream in this recipe.  You can use whatever flavoured ice cream you like that pairs well with banana, such a chocolate, strawberry or whatever else you like.  You can make your own ice cream using one of my recipes or use store brought.   Maraschino cherries with stems are available from some supermarkets, on line or you may find them in the cocktails section at the liquor store.

Keywords: banana sundae, homemade ice cream
Tried this recipe?Let us know how it was!