This roast cherry ice cream is bursting with fresh cherry flavour and makes the most of this fabulous fruit while its in season.

It's cherry season and I simply had to kick things off taking you through one of my favourite recipes, roast cherry ice cream.  This recipe is adapted from the one here with my own adaptations for an Australian audience and ingredients.

This recipe is not hard, but is time consuming, fiddly AF and despite all this totally worth it.  Its simply divine, and only available seasonally which makes it all the more special.

Last year my family and I went cherry picking on New Years Day.  We had so much fun we went again this year and its rapidly developing into a bit of a NYD tradition.

We picked our cherries at the lovely Cherry Hill Orchards.  They have a great setup with food trucks, music, activities for the kids and tastings of their products including their cherry soft drink Cherish and other products.  Buy tickets in advance as they do sell out.  They bus you out to the best place to pick and you can gorge yourself on a much fruit as you like before coming back.  When you leave you pay per kilo for what you pick.  The best cherries have a lovely rich dark purply red colour and if you leave the stems on they’ll keep much better.  On a warm day its also useful to have an esky to bring your cherries home in.

Remove the stems but LEAVE THE PITS IN.

You read that right.  Leave them in.  You’ll remove them later but right now leave them where they are.

Put your cherries into an ovenproof frypan or dish.

Sprinkle over ½ cup of sugar and pop into a preheated oven at 230C.  Check after 30 to 40 mins.  You want the tops to be starting to brown off and to go nice and roasty.  Give it a stir and pop back in for about 10mins ISH.

Remove from the oven Carefully – it goes without staying but it will be incredibly hot.  Leave to cool.

Now you can pit the cherries.  All 1.5 kgs of them.  I told you it was fiddly.  Pop on some gloves, grab a cherry pitter (no really, you need one for this recipe, I like this one) and work your way through it.

Pop the pits into a small saucepan and the pitted cherries into a bowl.  It doesn’t matter if the pits still have a bit of cherry flesh on them, you can remove this later.

Put your pitted cherries into a high sided container and blitz briefly with a stick blender.  To be honest I’ve probably blitzed this to much but it still worked.  You want to break up the fruit to release all the good stuff, but not pure it completely.

Put your blitzed cherries back into your pan and pop it on the stove.  You want to cook it down a bit to concentrate the flavours and give it a lovely jammy quality.

Allow to cool a bit, then strain.  This is another fiddly bit.  You’ll need to push the flesh through the strainer.  I started with a spatula but found a plastic cup worked better.

When you’ve got most of the fluid out put it on another bowl to weigh it.  You need about 560 grams of liquid.  If you don’t have enough, keep straining.  If you just can’t get any more you can top up with water, but to be honest you’ll better off to keep working at it.

If you have to much, put the liquid back into the pan and cook off some liquid until you’ve reduced it down a bit.  Then cool and weigh again.

In the meantime, add your cream (1 and ¾ cups) to the pits and simmer gently for about 10 mins, then leave to cool.

Put your mix into the fridge to chill. This will take a couple of hours at least.

If you don’t have time to churn it today the mix will keep for a few days in the fridge.

If you have a self-refrigerating ice-cream churn (more about these later), turn it on for about 10 mins to cool first.

Give your mix a good stir, then poor into your ice-cream maker.

Depending on your machine the ice-cream will take about 20mins to churn.  It should increase in volume and be thick like soft serve.

I used to poke at mine through the door to try and get to churn evenly but I found if I just leave it alone it doesn’t make much difference.

Pop into a pre chilled container and into the freezer for a few hours to firm up, but it's also delicious straight out of the churner.

This ice-cream is simple but so so so delicious.  Tastes amazing on its own, or with a drizzle of chocolate sauce for a Cherry Ripe effect.

Calm yourself down and eat some of this divine cherry ice-cream! 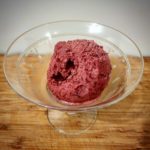 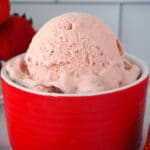 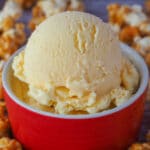 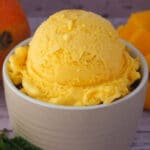 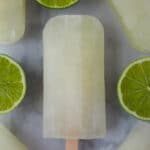 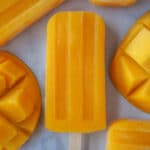 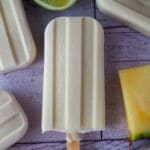 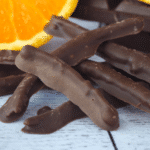 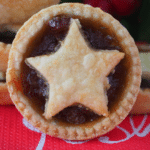 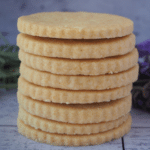