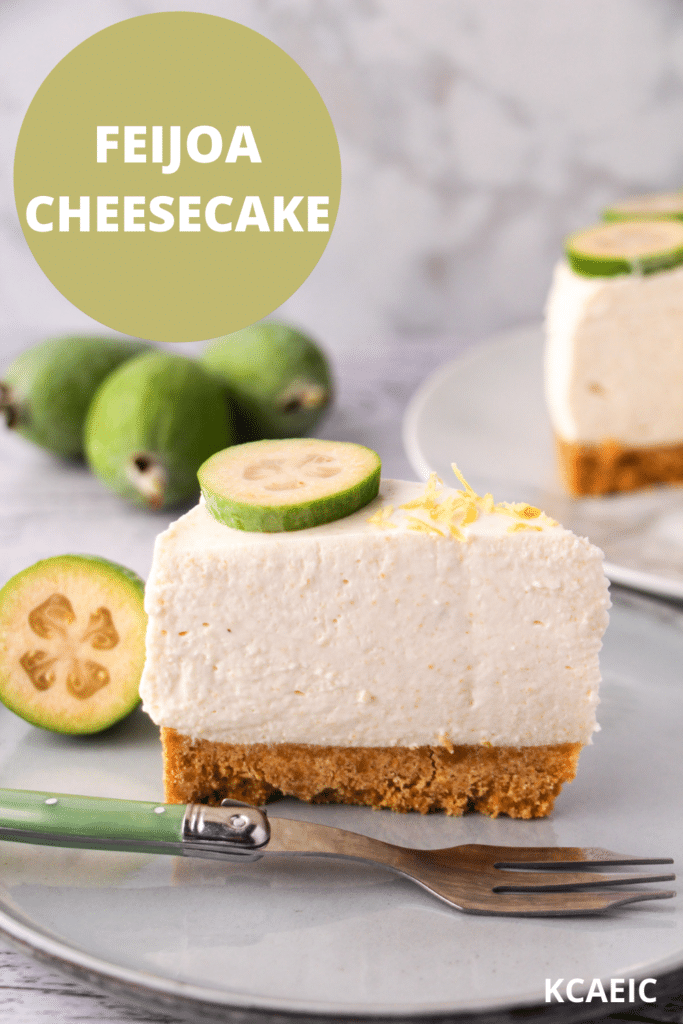 This no bake feijoa cheesecake is fresh, creamy, tangy and absolutely delicious! It's so good you'll be making it on repeat all feijoa season.

Feijoas, sometimes also called pineapple guavas, are one of the things my kiwi husband misses most from New Zealand. In New Zealand feijoas are planted everywhere. A single tree or bush can produce masses of fruit during feijoa season, anywhere from March to May in the southern hemisphere, depending on the variety.

One of my husband's other great loves in life is cheesecake. So when we were lucky to be given a huge bag of feijoas and I went on a big feijoa recipe kick it made sense to come up with delicious cheesecake, along with a feijoa crumble, feijoa cake and of course feijoa ice cream 🙂

Feijoas: you can use fresh or frozen feijoa pulp for this recipe. You will need one and a half cups of flesh or about 300gms in total.

Lemons: some fresh lemon helps boost the natural tang of the feijoas in this no bake cheesecake. You could also use limes instead.

Cream: I use thickened cream which as a fat content of about 34%. You could also use heavy cream or heavy whipping cream which is similar.

Sugar: a little sugar helps balance the tang of the feijoas. I used white sugar in this recipe to let the feijoa flavor shine.

Gelatin: a little bit of gelatin helps this no bake cheesecake set. Without it the amount of liquid is likely to prevent the cheesecake from setting properly and you would end up with cheesecake soup! Gelatin can vary in its strength depending on the brand, see the note the recipe card for a guide on how to check you have the right amount.

Digestive biscuits: are a type of sweet whole meal cookie sold in Australia. If you can't get digestives you can use the same amount of Graham crackers or Graham cracker crumbs.

Butter: because butter makes most things taste better. In this recipe it binds and sets the base.

How to make feijoa cheesecake

NB to get the lovely high on this cake I used a slightly smaller 7 inch by 2 & ½ inch spring form cake tin (18cm x 6.5cm). You can use a wider cake tin if that's what you have, but your cake will be flatter.

To make the cheesecake base

Grease and line your cheesecake pan. Break the biscuits into fine crumbs, either by breaking up and blitzing in a food processor. Or if you don't have one you can put them in a plastic bag on a chopping board, cover with a tea towel and carefully bash with a rolling pin.

Melt the butter in a microwave in or in a pan on the stove top. Add the butter to the crumbs and mix well. Tip into prepared cake tin. Press down firmly with the back of a spoon and chill for at least one hour, and up to twenty four hours before filling.

Hot tip: do not skip chilling the base. If its to hot when you add the filling it can make the filing weep, resulting in a soggy cheesecake base. If you are pressed for time on the day you can make the base the day before and store it in the fridge until you have time to make the filling.

To make the cheesecake filling

First make sure your cream cheese is at room temperature. This could take thirty minutes or more, depending on where you are.

Cut the feijoas in half lengthways and scoop out the flesh. You will need one and a half cups of firmly packed flesh or 300gms. Blitz the feijoa flesh in a food processor until smooth. Strain through a fine mesh. You should have about one cup of strained feijoa pulp.

Add the feijoa pulp to the cream cheese mix and mix well.

How to fix lumpy cheesecake batter

You can blitz the batter at this point with a stick/immersion blender to help remove the lumps from the cheesecake batter. You can also do this briefly after you have added the cream and gelatin mix.

In a separate bowl microwave proof bowl add the room temperature water and sprinkle over the gelatin to bloom for five minutes.

While the gelatin is blooming put your cream in a separate and whip until soft peaks form. Once the gelatin has bloomed, melt it by microwaving it for about ten to fifteen seconds. Mix well to ensure all the gelatin is mixed in and dissolved.

Temper the gelatin by adding a couple of spoonful's of the whipped cream and mix well. Add the tempered gelatin to the whipped cream by pouring it in slowly in batches while whipping the cream, ensuring its mixed well between each addition.

Pour the cheesecake batter over the chilled base and smooth down the top. Chill in fridge overnight or for at least eight, preferably twelve hours to allow the cheesecake to set properly.

Once set carefully open your spring form tin. If the baking paper is sticking you may need to use a butter knife to carefully unstick the paper from the tin, otherwise it can catch. Use a large sharp knife to slip between the cheesecake base and the baking paper on the bottom, then carefully transfer to a plate.

Slice some fresh feijoa coins. Dip them briefly on each side in the leftover lemon juice to stop them going brown. Place the feijoa disk around the edge of the cheesecake. Sprinkle the lemon zest in the center and you're done!

How long is cheesecake good for in the fridge?

This no bake cheesecake will store well covered in the fridge for up to five days, however after the first day or two the fresh feijoa disks on top may start to dry out a bit. 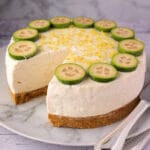 The gelatin helps the cheesecake set, despite the liquid from the feijoa pulp.   If you leave it out your cheesecake is likely to turn to mush. Gelatin brands can vary widely in their strength.   In Australia I used McKenzie's Gelatin powder.  If you are outside Australia you could try using half a satchel of Knox Gelatin, or enough to set 2 cups (500mls) of liquid.  To much gelatin can make the cheesecake gummy and unpleasant so you may need to experiment with you brand to get the right balance.   NB to get the lovely high on this cake I used a slightly smaller 7 inch by 2 & ½ inch spring form cake tin (18cm x 6.5cm). You can use a wider cake tin if that's what you have, but your cake will be flatter